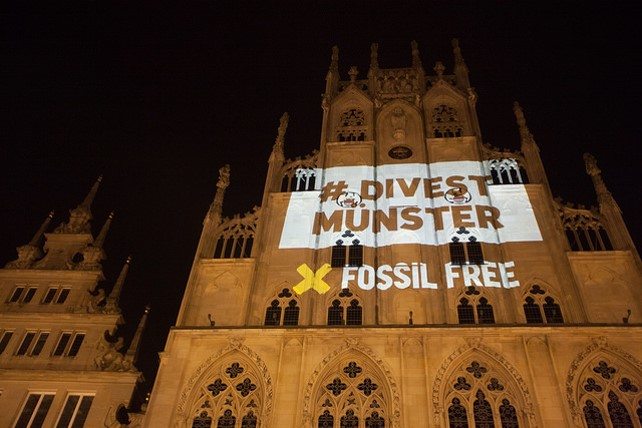 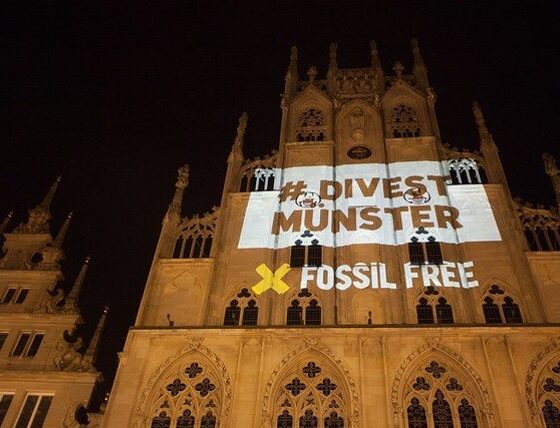 The City of Münster has become the first German city to ban investments in coal, oil and gas companies in response to the mounting threat of climate change.

Councillor Otto Reiners says: “To minimise financial risks for the City of Münster and reach our municipal climate targets, we need to pull out of fossil fuel companies as quickly as possible.”

Reiners refers to the financial risk of investments in fossil fuels that financial actors such as Bloomberg, the Bank of England and Standard & Poor’s warn of. Since the majority of coal, oil and gas reserves cannot be burnt to limit global temperature rise below 2℃, fossil fuel companies are currently exceedingly overvalued.

Fossil Free Münster worked closely with the city to formulate a new investment policy, which now defines a comprehensive set of ethical investment criteria. Besides fossil fuels, sectors such as nuclear energy, arms and child labour are also blacklisted.

Tine Langkamp who coordinates the divestment campaign for 350.org in Germany says: “Fossil Free Münster was the first group in Germany to put fossil fuel divestment on the political agenda. Now they’ve secured the first big win for the divestment movement in Germany. Münster is a real pioneer and we’ll continue to push to make many more follow.”

Münster joins a growing list of institutions that commit to divest from fossil fuels for ethical and financial reasons. In the lead-up to the UN climate negotiations in Paris, the movement is picking up speed. In the past two weeks alone, the Norwegian capital Oslo, the City of Melbourne in Australia and Uppsala in Sweden were among those that have pledged to ban investments in coal, oil and gas.