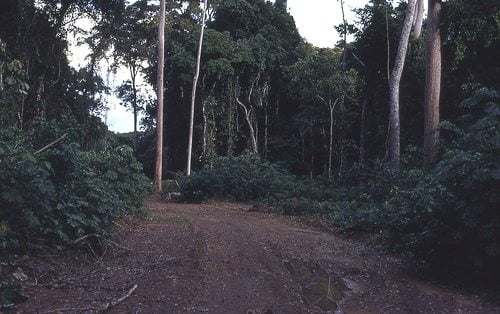 Logging in the Congo basin has slowed, a new study has suggested.

The research, published in in the Philosophical Transactions of the Royal Society B journal, used satellite images to measure deforestation in Africa between 1990 and 2010.

The study claims that the Congo basin rainforest shows the lowest deforestation rate of all tropical forest regions. At around 180m hectares, it is the second largest forest zone in the world, after the Amazon.

The study says that around 60 million people depend on Africa’s forests for food, medicine and fuel, as well as social and cultural functions. They also support 40 million people living in urban centres nearby.

Deforestation of the rainforests can also have a significant impact on the global climate, as well as local biodiversity. The Congo basin is home to endangered species such as forest elephants, chimpanzees and gorillas.

The study showed that in all three African regions, deforestation decreased by between 37% and 67% in the last decade when compared to 1990 to 2000.

The researchers found that during the 1990s, around 1,000 square miles of forest were lost each year. However between 2000 and 2010, that figure decreased to around 700 square miles.

The study claims that the total amount of forest lost every year in Africa is four times smaller than that lost in Latin America. However, it notes that deforestation rates still remain high in some areas, particularly in Madagascar.

In May, a similar study claimed that the speed of deforestation in the Amazon rainforest increased by 88% in 2012.