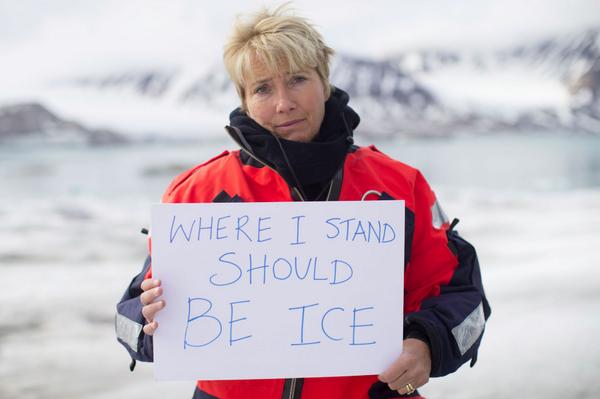 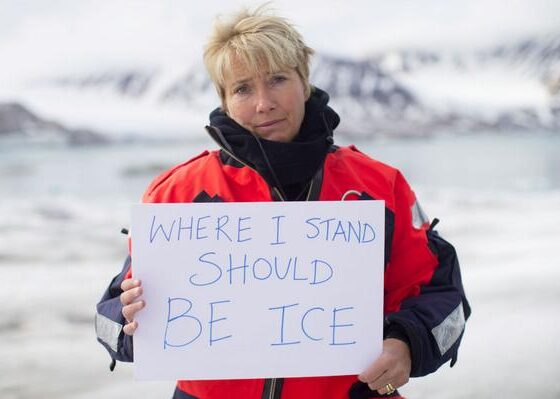 Actor Emma Thompson, while traveling with Greenpeace to the Arctic, has targeted Australian prime minister Tony Abbot for his stance on climate change and its effects on the continent.

In her personal protest, Thompson was photographed holding a message, which read, “Tony Abbott, climate change is real, I’m standing on it!”

The message is believed to be a response to Abbott’s stance regarding the science behind climate change. The prime minister has previously suggested climate science to be flawed, or “crap.”

Abbott’s government has been at the centre of numerous controversial environmental decisions. A recent move by the Australian government gave the green light for the controversial $16 million (£8.9m) Carmichael coal mine, which environmentalists fear may condemn the Great Barrier Reef. Australia is also currently leading the world’s first repeal on carbon pricing.

Thompson visited the Smeerenburg glacier in the north-west of Spitsbergen, a part of the Svalbard archipelago in the Arctic Ocean.

Ice loss from rising global temperatures in the Arctic has also been linked to 16-foot waves elsewhere in the ocean, raising fears of more chaotic sea weather.

Greenpeace are campaigning for the introduction of an Arctic conservation zone, free from drilling activities, which the campaign group believes to be a major threat to the Arctic’s environment.

Thompson said, “We’re told that it is all our fault, global warming – we want the fuel, we want our cars, and that the oil industry is merely responding to the needs of a greedy public.

“But that’s simply not fair. Most of us want to live cleaner lives, but our governments don’t make these things easily available.

“The changes we need, that the Arctic needs, must come from the top as well as the bottom. We need electric cars to be cheaper and more accessible. We want safer bike lanes in every big city.”