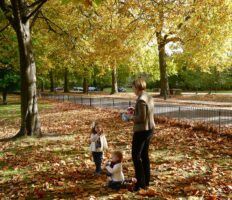 The air we breathe in London is breaching legal limits for pollution even in it’s famous Royal Parks, a new open data website has revealed today (10 August 2016). Friends of the Earth is calling on the Mayor to go further in his plans to clean up London’s filthy air.

The website, which shows the levels of Nitrogen Dioxide in green spaces across London, revealed that even large green spaces like Green Park, St James’s Park, Hyde Park and Regent’s Park have levels of NO2 which breech legal EU limits. Air pollution kills 10,000 people each year in London alone.

Sophie Neuburg, Friends of the Earth campaigner, says:
“It’s shocking to learn that even in London’s supposedly green spaces, the air we breathe is unsafe.

No-one suspects that when they have a summer picnic, they are actually breathing in fumes which are linked to heart disease and cancer. Children playing outside are being exposed to filthy air which is damaging their lungs and causing asthma.

“Sadiq Khan’s vow to make cleaning up our air a top priority is welcome, but his plans don’t go far enough – he must commit to bringing London’s air pollution down to legal and safe levels by 2020 and pledge now to restict traffic when pollution is bad.”