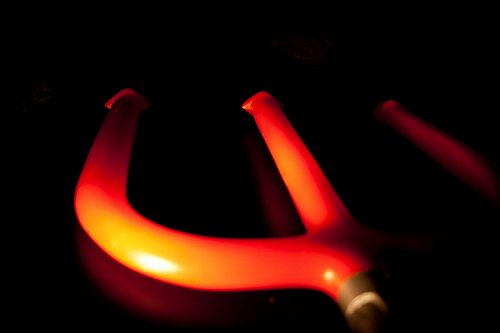 Faust, or Dr Faustus, sold his (or her) soul to the devil

The classic German legend of Faust, popularised in the 1806 play by Johann Wolfgang Von Goethe but perfected two centuries earlier (1592) by William Shakespeare’s contemporary Christopher (Kit) Marlowe, tells of a successful but dissatisfied scholar who wants more than the mortal world can provide.

He ‘sells’ his soul to the immortal devil in return for knowledge and pleasure. Needless to say, deals with the devil end badly.

At the end of the tale, having enjoyed unlimited knowledge and exquisite human pleasure, under a signature of blood, Faust’s soul is given to the devil and dragged to hell for eternal damnation and torture. It’s a truly ripping yarn and moral lesson on the perils of mortal sin.

As with Milton in Paradise Lost (“Better to reign in hell, than serve in heaven“) all the best lines go to the devil and in Faust(us)’s case, the devil is represented by Mephistopheles. Film buffs will just want Al Pacino as John Milton (or Satan), from Keanu Reeves’ movie The Devil’s Advocate, to say the Dr Faustus line, “All places shall be hell that is not heaven.”

So we turn to Faust’s namesake, the president of Harvard University, Drew Faust.

Depending on who you believe, Drew means courageous, masculine or in Anglo Saxon, wise. Faust literally translates to fist.

So we have, as the current boss at Harvard, a ‘wise fist’, who shares her name with a wise academic created to teach us something morally profound. No bad thing, until you read the real world Faust’s recent pronouncements about fossil fuel divestment.

It appears our ‘wise fist’ sees fossil fuel divestment as “neither warranted nor wise“. Is this the deal with the devil such a name warrants?

To maximise short-term profit for Harvard, the president of the university has ‘sold her soul’ to those who will condemn our planet to irreversible climate change.

The price of such an unwise view is huge. No less than condemning future generations to hell.

Faust said that fossil fuels companies “wouldn’t notice” Harvard’s divestment from fossil fuels. Really? What a profound message to the ‘free’ market from one of the world’s oldest and leading Ivy League universities. CEOs of oil and gas companies would certainly sit up and listen if Harvard divested from their firms.

Founded in 1636, English clergyman (and probable abolitionist) John Harvard’s deathbed bequest was to the fledgling college in Cambridge, Massachusetts that now bears his name as the first benefactor, if not founder, of the university. Students rub his imperfect resemblance statue’s toe in the university on their way to class.

But let us not forget that this is a university, with the world’s leading business school that has trained and profited from a generation of financial institutions’ senior executives, that manifestly failed to challenge or predict the ethical and financial bankruptcy of the self-same financial institutions before the 2008 crash.

Watch the film Inside Job to see Harvard’s alleged collusion and embarrassment about the financial crash (clips are hard to see online as, for some unknown reason, all have vanished or been blocked for ‘copyright infringement’).

We know it’s hot in hell, but a 2C increase in temperature will be catastrophic for all of us, no matter how privileged our education.

Maybe Drew Faust is just trying to acclimatise herself to the heat she’ll face in the future. After all, her students will be the ones paying the very heavy price for her declared investment policy in years to come, long after she’s gone to meet a choir – either demonic and pitchforked or angelic and soulful – having left this mortal coil to prop up the daisies.

Faust also said, “Divestment would hurt Harvard’s bottom’s line.” In the meantime, investment in fossil fuels is hurting its students’ future, and their triple bottom line. Research by Impax Asset Management in July actually said that divesting from fossil fuels was a compelling win-win for investors and that claims of underperformance were misleading.

In Marlowe’s play, Mephistopheles tells Dr Faustus, “It is comfort to the wretched to have companions in misery.” Meanwhile, Drew Faust concludes, “The [Harvard] endowment is not an instrument to impel social or political change.”

How about improving the future life chances of your Harvard students, then?

Harvard’s motto is ‘Veritas’, or ‘truth’.

Human-caused (anthropogenic) climate change is the ‘truth’ and our generation’s slavery. And climate change is principally caused by burning fossil fuels. Drew Faust appears to think there is no contradiction between her role educating the young and sabotaging their future through what Harvard invests in.

With her comments, she devalues a Harvard degree to the point of irrelevance. If she genuinely reflected the view of Harvard academics, then the greatest university in the world has been hijacked by lunatics.

Can it be a coincidence that the esteemed author JK Rowling chose crimson as the colour of her preferred house in Hogwarts, Gryffindor, as that is the colour of one of the world’s most prestigious universities, Harvard? Harvard nearly went for magenta in 1875. (Incidentally, Rowling gave this excellent Harvard commencement speech in 2008.)

In The Philosopher’s Stone, the sorting hat says to Harry Potter, “You might belong in Gryffindor, where dwell the brave of heart, their daring, nerve and chivalry, set Gryffindors apart.”

As one of the Forbes 100 most powerful women in the world, it is genuinely tragic for future generations that Drew Faust shares the decisions of her reactionary namesake. However, it is not as progressive as the brave of heart of those who are sorted into a fictional house that shares her college’s colours.

In the history of the world, it is those that do good against extraordinary odds who are recognised by all. Those who profit from short-term commercial gain tend to be judged a lot more harshly. We can only wonder what President Faust’s students and great-grandchildren will think of her ignorant pronouncements in a few years’ time.

Chivalry means, “The qualities idealised by knighthood, such as bravery, courtesy, honour, and gallantry.”

Faustian means, “Insatiably striving for worldly knowledge, profit and power even at the price of spiritual values; ‘a Faustian pact with the devil’.”

We embrace the former chivalric and reject the latter Faustian terms. The Latinised form of Faustus means ‘of favourable omen’. We can only hope that Drew Faust chooses to follow the positive inclinations of her name, not its literary negatives.

Our fragile and endangered planet needs a genuinely favourable omen. Harvard could play that role. We desperately need their brave of heart, their daring, nerve and chivalry.

Today or tomorrow will do, but today would be better.