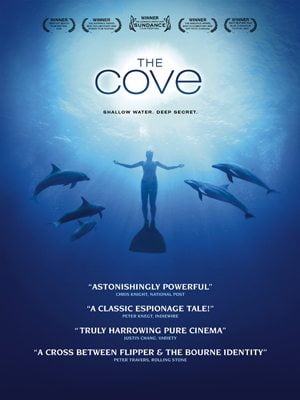 The Cove is documentary that analyses and questions Japan’s dolphin hunting culture. It follows Richard O’Barry’s efforts to record the dolphin slaughter in Taiji, Japan.

The film is a call to action to halt mass dolphin kills and change Japanese fishing practices. In the region, migrating dolphins are herded into a cove where they are then killed or captured. According to the film, 23,000 dolphins and porpoises are killed each year in Japan. The dolphins that are captured are sold to aquariums and marine parks.

In the 1960s, Richard O’Barry helped capture and train dolphins for the TV show Flipper. Since then he has become a staunch opponent of the dolphin captivity industry, and according to The Cove, has dedicated himself as an advocate on behalf of dolphins.

Whilst the film is told from an ocean conservationist point of view, it is not one sided. It includes interviews with Japanese government officials and coverage of the International Whaling Commission gatherings.

The film also looks at human welfare. Dolphin meat contains a high amount of mercury, which people are unknowingly consuming because it is sold as whale meat.

Overall, the film shows the reality and cruelty of the practice. It’s informative and excellently edited and will hold an audience’s interest. This thought provoking documentary is a must watch; its Oscar for Best Documentary Feature is a testament to its insightfulness and relevance.