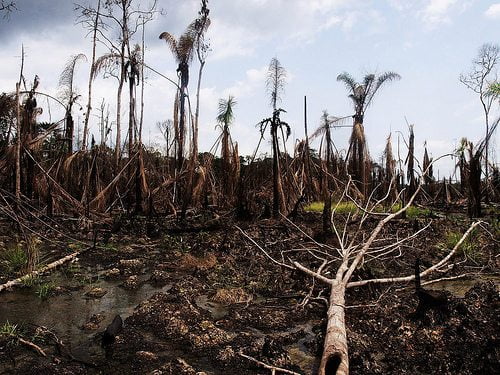 The Bodo community, which was severely affected by the oil spill which occurred in 2008, has rejected the compensation offered by the Anglo-Dutch oil firm as ‘cruel’ and potentially discriminating.

A court in London will now be required to quantify the compensation amount that oil giant Shell should provide to 11,000 people whose livelihoods have been affected by the spill.

Fishermen and farmers from the Bodo community were offered £30 million – around £1,100 per person – according to the Guardian. But the community said this is too low considering the losses that the community is facing.

People living on the Niger delta and the surrounding environment were hit by thousands of barrels of crude oil when a rusting 50 year-old pipeline operated by Shell burst in 2008. The effect on mangrove forests, crops and groundwater was devastating, according to residents.

The small compensation offered by the oil firm has sparked outrage among local authorities. Kogbara, chairman of the Bodo council said, “Shell continue to treat the people of Bodo with the same contempt as they did from the start when they tried in 2009 to buy us off by offering the community the total sum of £4,000 to settle the claims.

“We told them in 2009 the people of Bodo are a proud and fiercely determined community. Our habitat and income have been destroyed by Shell oil. The claim against Shell will not resolve until they recognise this and pay us fully and fairly for what they have done.”

During a community meeting, fishermen raised the question as to whether Shell’s small offer was made because people in Nigeria are poor, arguing that it would be much higher had the spill occurred in the UK or the US.

A spokesman for Shell commented, “We took part in this week’s settlement negotiations with two objectives – to make a generous offer of compensation to those who have suffered hardship as a result of the two highly regrettable operational spills in 2008, and to make progress in relation to cleanup”. He added that more efforts should be made to stop illegal oil thefts and sabotages, which contribute to the environmental pollution – and also to falls in Shell’s profits.