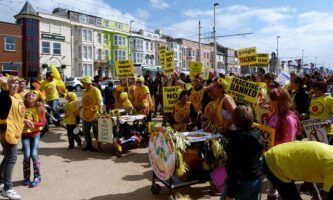 Today the government made its mind up to allow fracking to take place at Preston New Road in Lancashire. This decision has been slammed by local communities in Lancashire and Friends of the Earth.

In June 2015 Lancashire County Council voted against shale gas drilling following over 18,000 local objections. But, fracking company Cuadrilla appealed against the council’s decision. This has resulted in just one minister making the final decision on whether fracking is allowed at Preston New Road, and Roseacre Wood.

Today’s decision from Secretary of State for Communities and Local Government Sajid Javid to over-rule the decision by the County Council in allowing fracking to proceed at one of the two sites, Preston New Road, means that fracking will be allowed to proceed in Lancashire.

“This is a sad day as it is clear to all that this government neither listens nor can it be trusted to do the right thing for local communities.

It is deplorable that an industry that has been rejected on every level has inflicted itself on Preston New Road.

“Westby Parish Council, Fylde Borough Council and Lancashire County Council planning committee all said no to this application. These reasons were based on facts and knowledge, they rejected the site as unsuitable.

“Dismantling the democratic process to facilitate a dirty fossil fuel industry when only months ago the UK committed to climate change targets in Paris is another example of saying one thing and doing another.

“Profit clearly comes before people. This decision will be scrutinised by many, not just the people of Lancashire and this travesty of justice will not be accepted. This is not the end. We will challenge this.”

“While we are happy that there will be no fracking in Roseacre, our joy is obviously tempered by the decision to allow fracking to go ahead elsewhere in Lancashire. We will do what we can to support our friends at Preston New Road in their continuing fight.

“After researching this industry for over two and a half years we are of the firm opinion that fracking has no place anywhere in the UK. The risks to our health and wellbeing, environment and climate change are far too high and the benefits seriously over-hyped. There is still a significant threat from this industry especially in the North of England.
“Fracking is not the solution. It is a backward step in energy policy. Ours is a small and densely populated country, unlike the wide open spaces of the US, which cannot support such an industry without devastating results. Be assured this is about money not people.”

“This is bad news for Lancashire – the community have been fighting fracking for more than five years. This fight continues until this unproven and unpopular industry disappear for good.

“Instead of shoving us down a dangerous path that inevitably leads to climate change, the government should invest in renewables and energy efficiency, an emerging industry that could create 24,000 jobs in the north west alone.”

Friends of the Earth will be looking closely at this decision and we continue to support the community in their campaign to make sure all of Lancashire stays frack free. Only 19% of people support shale gas compared to 81% support for renewables.