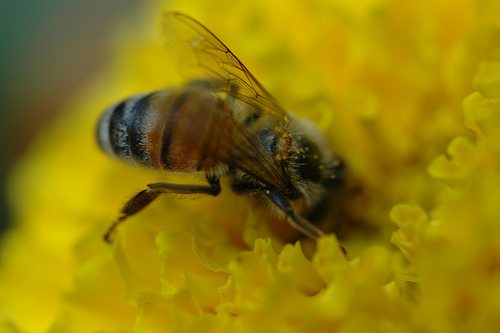 The government has published a statement explaining that it must accept the EU ban of the pesticides linked to bee deaths, but that it rejects the science behind the decision and will not ban their use in private gardens.

In a report published in April, the environmental audit committee (EAC) concluded that although nobody knows for certain why two-thirds of UK bees had been wiped out, there is strong evidence that the pesticides may be involved.

Pollinators such as bees are responsible for pollinating a third of the world’s crop production. Bees alone pollinate more than £1 billion worth of crops in the UK each year.

However, in a response to the EAC report, the government has today announced, “We opposed these restrictions because our assessment was (and remains) that the evidence did not point to risks to pollinators that would justify the proposed restrictions. Nevertheless, the commission have adopted the proposals and we will implement them in full when they come into effect on 1 December.”

The EAC report recommended that the Department for Environment, Food and Rural Affairs (Defra) withdrew approvals for the use of neonicotinoids in private gardens and on amenities such as golf courses. However, the government has rejected this proposal, arguing that private use of the insecticide can “have a significant economic value.”

The National Farmers’ Union (NFU) has welcomed the government’s decision. NFU horticulture adviser Chris Hartfield said, “This response from government is a very balanced and sensible reaction to the EAC’s report.

“While acknowledging the importance of pollinators, the government’s response also importantly recognises the value to society of food production and the underpinning role pesticides play in that production.”

However, environmental charities have condemned the government’s approach. Friends of the Earth nature campaigner Sandra Bell, said, “The government has again turned a blind eye to the overwhelming scientific evidence on one of the main causes of massive bee decline in the UK; although it begrudgingly accepts that it must follow the temporary EU ban on these powerful chemicals.

“Instead of defending these pesticides and their manufacturers, Ministers should help farmers reduce their use and develop techniques to maintain yields.

“The government’s promised National Pollinator Strategy must tackle all causes of bee decline including the use of chemical pesticides.”

Friends of the Earth have launched a petition urging prime minister David Cameron to make 2013 “the Year of the Bee.”