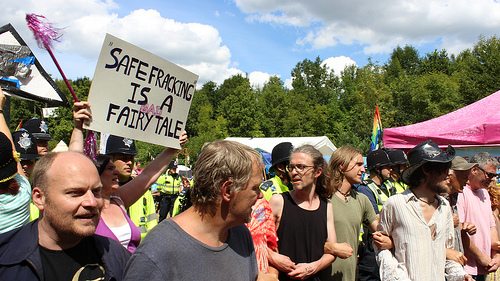 Greenpeace has launched a legal challenge to stop companies from fracking in England, and to halt what it calls “reckless and presumptuous” plans for shale gas extraction across the country.

The environmental campaign group announced its intentions at a press conference in Lancashire, where many homes are situated near to potential fracking sites.

It also included a number of people from the West Sussex village of Balcombe, where two months of anti-fracking protests saw over 100 arrests.

Campaigners gathered at the village when energy company Cuadrilla began exploratory drilling at the site to investigate its potential for shale gas extraction. When the firm packed up its equipment and vacated the site, the protestors began to withdraw, but vowed to return if Cuadrilla resumed operations.

Greenpeace spokeswoman Anna Jones said, “Fracking is risky for local environments, risky for our water supplies and risky for the global climate.

“People are right to stand up and say ‘Not under my land you don’t’.”

Greenpeace says it expects thousands of people to join them in making legal challenges, creating a number of areas the fracking industry cannot touch across the country.

Under English law, land ownership rights extend to all the ground beneath a property. This means if someone drills under your home without permission it can be construed as trespass.

Lawyer Kate Harrison of Harrison Grant said, “The common law on this is clear. If fracking companies don’t seek and receive permission for drilling under people’s homes they will be liable for trespass.

“Anyone living in an area that the government is considering for oil and gas drilling and possible fracking can join the block.”

Karen Ditchfield, a company director and resident near a site in Lancashire which has been drilled but not yet fracked, said, “My husband and I are joining the legal block because we’re worried and frustrated about what’s going on.

“No one has asked us if they can drill under our home and land. But this is not just about my life, it is my children’s lives, and what we’re leaving for people for years to come.”

Meanwhile Charles Metcalfe from Balcombe added, “Balcombe residents have spent the summer fighting Cuadrilla, while the Government and local councils have done nothing to stop them.

“There are so many reasons why fracking would be disastrous for the UK.”

Campaigners have raised many concerns over the possible consequences of fracking. The process has been linked to groundwater pollution  and increased risk of earthquakes, and it damages the environment as it is a carbon intensive form of fuel.

On Friday, France’s constitutional court upheld its national ban on fracking, ruling that it is necessary to protect the environment.