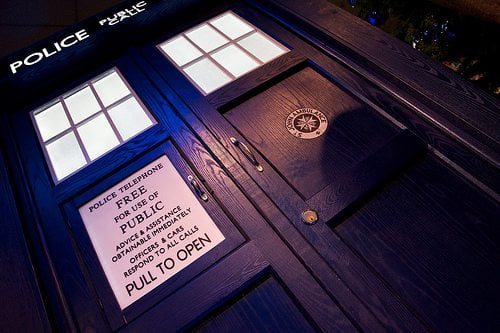 In Doctor Who’s universe, the majority of investors would back the Master

As we close in on the much awaited, heavily trailed 50th anniversary of Doctor Who, the BBC has been pumping out enough Whovian content to satisfy the most ardent fan. That includes our publisher, Simon Leadbetter.

Apologies for the shameless bandwagon jumping, but I happily admit I’m a fan of Doctor Who. I’m a fan of what he stands for: endless optimism, curiosity, enthusiasm and compassion.

I was four or five when my parents took me to the Blackpool Illuminations to see the star attraction, the fourth Doctor, played by Tom Baker. Sitting on my father’s shoulders so I could see everything, my parents tell the story of me freezing, catatonic, when a Cyberman appeared on stage.

On this occasion, there was no sofa to hide behind and the villain was not safely inside the television, where he should be. Years of therapy have helped.

It has been the ability of the programme to flout age-appropriate guidelines, scaring and delighting children (and their parents) in equal measure, which has made it the longest running sci-fi series of all time. Almost all post-1963 sci-fi owes a debt to Doctor Who. Fans range from the Queen and the Prince of Wales, through George Lucas, Peter Jackson and Steven Spielberg to Bob Dylan.

The plot device of regeneration means the Doctor will probably be with us for at least another 50 years. Which can only be a good thing.

The Doctor has had many formidable enemies: the aforementioned Cybermen, serial exterminators the Daleks, the Sontarans, Ice Warriors, Weeping Angels and more. But one of the most interesting villains has been the Master. The Master, a Time Lord like the Doctor, presents the flip side of what someone with this enormous power, near-immortality and the ability to travel anywhere through time and space, could be and would do.

While the Doctor uses his time travelling and longevity to fight for the underdog, the sociopathic Master is only in it for himself. While the Doctor is certainly a maverick, mercurial and even Machiavellian at times, he also has a strong ethical and moral code, even destroying his own race for the greater good.

In his time, the Master has travelled through time to profit from compound interest (if you accept the view that the Monk was his first incarnation), manipulate and conquer other races, in the overall aim of becoming master of all time.

The Doctor’s Sherlock Holmes plays off against the Master’s Prof James Moriarty. Both geniuses, but one using that genius for good and one for ill. The parallels make it fitting that the current executive producer of Doctor Who, Steven Moffat, should have gone on to create the excellent Sherlock, starring Benedict Cumberbatch and Martin Freeman.

While the Doctor, Master and other Time Lords are presented as aliens, they are us. We are masters of our planet, while they master the universe. Time Lords see us in the way that many humans see other species on earth. Dumb, unenlightened creatures, useful up to a point and worth conserving, but certainly not equal.

If you could travel through the single dimension of time, what would you do? Try to help others or profit personally? If we added the dimension of space, would you be looking for greater power for yourself and clique or greater freedom and prosperity for all?

Well, as Prof Brian Cox would point out, we are travelling through time and space, just not in Tardis-like leaps.

Science fiction allows us to create personal and collective ‘what ifs’, extrapolating current thinking and emerging trends to logical or leapfrogged conclusions. Utopia and dystopia are often the divergent end games. Science fictions means we can safely test our political, social and economic philosophies, alongside scientific and technological advances. Science fiction is not just children’s entertainment but a mirror for our past, current and future selves and society.

The evidence all around us suggests we have created a dysfunctional political, economic, social and environmental system that works against the common good. There is enough food, money, medicine and resources in the world for every one of the 7 billion of us to have a very good life, and enjoy life, liberty and the pursuit of happiness. There is enough for 10 billion, but that’s about it. We are currently degrading our planet and its resources at such an alarming rate we are threatening future generations.

We can power the whole Earth many times over with just one second of what the sun blasts us with. As Thomas Edison (who the Doctor has never met, as far as I can tell) put it in 1931, “We are like tenant farmers chopping down the fence around our house for fuel when we should be using nature’s inexhaustible sources of energy — sun, wind and tide… I’d put my money on the sun and solar energy. What a source of power! I hope we don’t have to wait until oil and coal run out before we tackle that.”

He certainly has won in terms of room size. Who can hide behind their sofa these days? They’re all pushed up against the walls in our tiny living rooms.*

The Day of the Doctor is simulcast globally at 7:50pm on Saturday November 23.

* Thanks to the comedian Joel Dommett for that excellent observation.

Do we live in a bullyconomy?