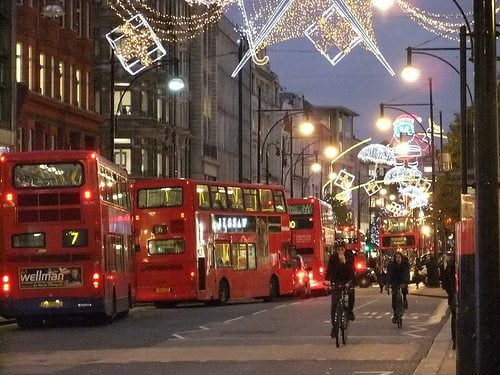 It may be best known for its many shops, but Oxford Street in London is also home to the world’s highest levels of the toxic compound nitrogen dioxide (NO2), which comes from diesel engines and can cause breathing problems and heart-related diseases.

Scientists installed a monitoring station on the street and recorded an NO2 concentration of 135 micrograms (mcg) per cubic metre of air, which is more than four times the European Union’s safe limit of 40mcg and beats the levels of NO2 found in Asian cities.

The high levels are likely to be caused by taxis and other vehicles that go up and down the street, which is one of London’s most popular venues for tourists.

Levels recorded during daytime, when the street is at its busiest, peaked at 436 mcg per cubic metre of air in March.

Scientists carrying on the research have also analysed the effects on people suffering from asthma, whose symptoms were worsened after spending some time on Oxford Street.

Speaking to the Sunday Times, David Carslaw, air quality scientist at London King’s College, said, “To my knowledge this level is the highest in the world in terms of both hourly and annual mean. NO2 concentrations in Oxford Street are as high as they have ever been in the long history of air pollution”.

Green party assembly member Jenny Jones said at the time that Oxford Street was “a disgraceful example of the government and mayor’s failure to take responsibility for air pollution”.

Following a pollution alert in the UK in April and figures suggesting that bad air quality causes up to 29,000 deaths each year, pressure groups have called for the government to introduce an action plan to promote cleaner transport and improve air quality.