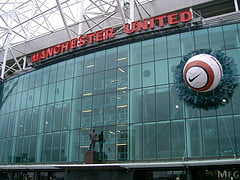 Manchester United has become the first football club in England to be granted the international Environmental Management System standard, ISO14001, in recognition for its continued good work in the sector.

The club says the accreditation “once again [proves] its desire to be the best off the pitch as well as on it”, and plans to hold two more sustainability standards by the end of the year.

Manchester United has become the first football club in England to be granted the international Environmental Management System standard, ISO14001, in recognition for its continued good work in the sector.

The club says the accreditation “once again [proves] its desire to be the best off the pitch as well as on it”, and plans to hold two more sustainability standards by the end of the year.

Although second in the Premier League, behind rivals Manchester City, the positive news places it firmly ahead of the rest of the bunch in the environmental space.

Naturally delighted at the Club’s endorsement, chief operating officer Michael Bolingbroke said, “Here at Manchester United, we take environmental management very seriously and being certified to an international standard is testament to all the hard work across the Club.

“It’s a real boost to receive this recognition for the work we’ve been doing for many years.”

Indeed, back in November, United came out top in the Government’s Carbon Reduction Commitment Energy Efficiency Scheme league table, which ranks participants in terms of their proactivity in managing their energy usage.

In 2010, the club was awarded the Carbon Trust Standard which recognises organisations that have gone to great lengths to reduce their carbon emissions.

The acceptance of this sustainability standard, then, is just another environmental trophy to add to the bulging cabinet at Old Trafford.

Speaking about the news, former United defender, Gary Neville, said: “It’s fantastic to see that Manchester United has been recognised for its efforts in environmental management.

“I know that the Club is extremely committed to improving sustainability and this certification proves we’re heading in the right direction.”

Neville recently took up the role of environmental ambassador at the Club, and is one of very few sportsmen and women to publicly champion sustainable lifestyles.

After receiving a considerable amount of mockery over plans for a so-called “Teletubbies” house last year, he has instead opted for a ‘butterfly’ design, according to the Mirror.

But Neville’s green advocacy doesn’t stop there. Along with Ecotricity founder, Dale Vince, he founded Sustainability in Sport, an organisation that aims to “support the continuing growth of sport within UK communities, whilst reducing the associated environmental impacts.”

Neville’s behind-the-scenes involvement at Manchester United since his retirement from playing last year will have undoubtedly had a positive effect in the Club achieving the first of three sustainability standards that it plans to collect.

Football’s place as the biggest sport in the world means it has a huge role to play in realising a sustainable future, and like Manchester United, the sport is slowly but surely taking steps to do this.

You can play your part as well. Investment in sustainable funds and companies is one of the most effective ways that you can contribute. And it’s easier to do than you think; just ask your IFA or fill in our form and we’ll connect you to a specialist ethical adviser.