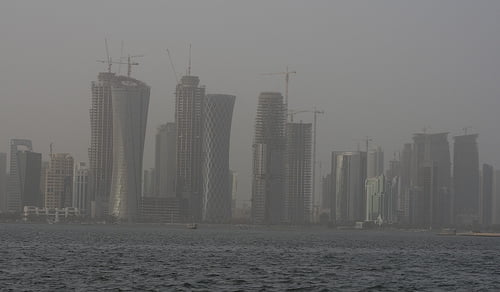 Qatar, a world leader in oil and gas extraction, is looking to implement a number of sustainable development and environmental goals that it hopes to achieve by 2030.

Natural gas and oil deposits account for almost all of Qatar’s GDP. Its humid and extremely hot climate makes it hard for the agricultural sector to flourish, but the country’s plentiful fossil fuel reserves means it is one of the richest in the Middle East.

Qatar is a member of the Organisation of the Petroleum Exporting Countries (OPEC) and oil represents 85% of its export income. Its natural gas deposits are the third largest in the world.

However, this wealth has severe consequences. Qatar’s carbon dioxide emissions per capita have been at their highest rate ever in recent years. Citizens have free access to electricity – they don’t have to pay for supplies – and this results in greater consumption levels.

Moreover, water in Qatar comes from desalinisation of marine water, a process that requires a huge amount of energy.

The country has been chosen to host the World Cup in 2022. It will build new stadiums suitable for the hot climate – summer temperature exceed 40C – but this will use a lot of energy as well.

Arguably, for all these reasons and perhaps spurred on by 2012 Doha climate negotiations, the Qatar General Secretariat for Development Planning has issued a list of sustainable development goals, included in the Qatar National Vision 2030.

“Qatar aims to be an advanced society capable of sustaining its development and providing a high standard of living for all of its people”, it says.

It stressed that the initiative “emphasises the importance of increasing citizens’ awareness of their role in protecting the country’s environment for their children and the nation’s future generations”.

It might be challenging to balance environmental concerns and oil prosperity. However, Qatar’s neighbour Saudi Arabia has started to develop new solar power plants that are achieving considerable success.