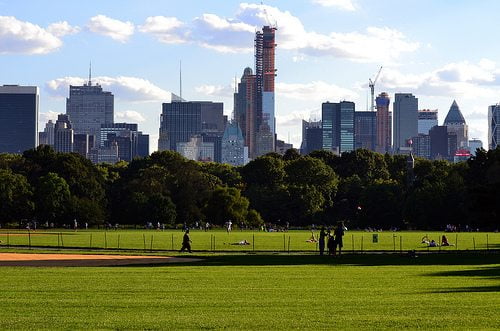 Against a backdrop of urbanisation and increasing environmental and social threats, Miles Davey, co-founder and director of Lewis Davey, writes about the future evolution of our cities.

Our future cities are going to look a lot different than those we live in today.

For starters, you will need to get your head around urbanisation. More and more people are electing to dwell in cities. By 2050, over 70% of the population will live in cities.

At the same time, population is growing. By the middle of the 21st century, the urban population will almost double, increasing from approximately 3.4 billion in 2009 to 6.4 billion in 2050, according to the World Health Organisation.

That’s a lot of people living in cities; a lot of people looking to get on that tube at rush hour; a lot more people in one area at risk from flooding and other natural disasters. Our cities will have to evolve and become smarter and become more resilient to adapt to this mass urbanisation.

Next you need to throw in some climate change. Our temperatures are increasing, as is the intensity of storms and the risk from rising sea level and storm surges.

We might witness mass migration as large land masses become inhabitable. With an increasing population, we are likely to see an increase in consumption and resources are scarce. We are likely to see greater pressures on our infrastructure – our roads, airports and energy supply.  How we plan for that now is key, but what could our future cities look like?

Jeremy Rifkin has put forward the idea of the “third Industrial Revolution” and explores how internet technology and renewable energy are merging together. Through history, we’ve seen how the motor car has triggered the Industrial Revolution and we could well be in the midst of another revolution where every home has its own decentralised energy that intelligently talks to the grid and where energy is shared and stored through, amongst other things, electric vehicles.

I don’t doubt for a moment that we will witness a greater concentration of renewables and a more connected grid. Just look around you at the sheer number of solar installations. This has no doubt been driven by subsidies such as the feed-in tariff, but with cost of solar expected to drop continuously, we will move closer to grid parity where solar is competitive with traditional fossil fuels.

Innovation will also play its part. Who knows what disruptive technology will rear its head? One thing that is for sure is that cities will act as an immense melting pot of innovation and creativity where engineers, investors, economists and psychiatrists all collaborate – working alongside each other, together, to meet the challenges our future cities will present.

Urban design and urban planning will have a big influence, also. Sustainable masterplans must be developed to ensure that the urban form stands the test of time as we build future-ready cities.

The National Planning Policy Framework is increasingly focused upon promoting sustainable development and planning for a climate change affected future. Planners need to collaborate with a whole plethora of professionals to ensure what we build now meets the needs of individuals, businesses and both the current and future global population.

We can expect smarter buildings, better infrastructure, urban spaces that are planned to take into account mass urbanisation. But what we can’t expect is what the people who are the centre of everything in a smarter more sustainable world will innovate next.