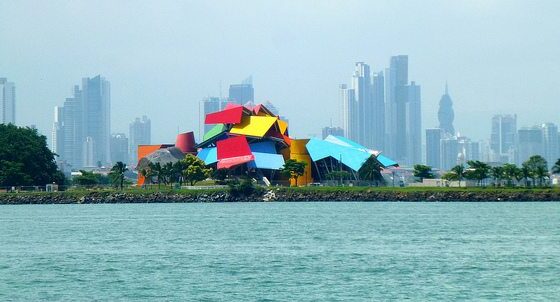 A long-awaited museum celebrating biodiversity, designed by the famous architect Frank Gehry, has opened in Panama.

The Biomuseo, on the mouth of the Panama Canal, showcases the unique ecosystem of the isthmus connecting North and South America, upon which Panama lies.

The small bridge of land has been home to more bird, mammal and reptile species than the US and Canada combined.

With eight galleries, the Biomuseo will tell the story of life on the isthmus and how it has affected the biodiversity of the entire planet.

The museum, which features bold metallic curves, and bright sweeping canopies, will open for guests on Thursday following its inauguration on Tuesday.

It has proved a long wait for Panama, with the museum first proposed in 1999 but delayed by a lack of finance and a withdrawal of government support. It is the first building that the Canadian architect, hailed as one of the most important architects of his age, has designed in Latin America.

The organisers behind the Biomuseo say that they hope all visitors will leave with an understanding of the need to protect their environment and the creatures that depend upon it.

Its opening coincides with the publication of a shocking report that revealed more than half of all the planet’s wildlife has been lost in the last 40 years.

The report concluded that populations of fish, birds, mammals, amphibians and reptiles have declined by 52% since 1970, with freshwater species declining by 76% – with much of the loss happening in tropical regions like South America.

The majority of the losses have been caused by manmade environmental degradation, followed by hunting and fishing and climate change.