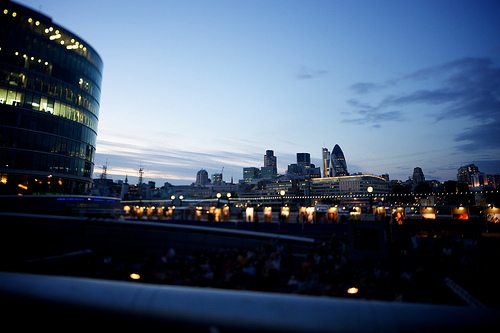 Mayors, and not national politicians, are the key to a sustainable future. We should look to them for social, environmental and investment leadership.

A week ago today, the intergovernmental Panel on Climate Change (IPCC) released a damning report into the physical state of our planet’s climate. Human activity is the prime contributor to global warming, the overwhelming majority of scientists involved concluded.

A few days later, the Conservative party conference kicked off in Manchester. After a series of underwhelming speeches from the party since it came to power in 2010, that barely even broached the subjects of sustainability and climate change, surely now – of all occasions – was the perfect opportunity for it to grasp the issues by the horns and promise action. Or at least mention the issues.

As it was, all we were given was an unsustainable keynote from the chancellor, a disappointingly sparse speech from the prime minister and embarrassing pseudo-scientific nonsense from the environment secretary, who said that global warming could actually benefit the UK.

All in all, the conference did nothing but add to the opposition against the government – which, to think, once badged itself as the “greenest ever”.

The Conservative party’s failure was offensive to its historical roots, which lie firmly in conservation, responsibility and a preservation of the natural environment (its name is a bit of a clue). Writing in the London Evening Standard in March, Independent editor Amol Rajan described the coalition’s green fatigue as “a betrayal of conservatism itself”. Few would disagree.

So where do we go from here? The Tories – and their coalition partners the Lib Dems – have spectacularly failed the general public on all things sustainable, environmental and green. An opportunity for Labour to come back with strong words and action, you’d think? Perhaps, but Ed Miliband and his colleagues also appear reticent to step up to the mark.

But while our national politicians have provided us with underwhelming policies at a time when proper leadership – now more than ever – is needed, there is an opportunity for another key group of decision makers to make a difference: our city mayors.

Mayors rule the roost at a local level. They make decisions that directly affect their constituents. They make these decisions with the long-term in mind, rather than simply the next election. Whereas their peers in government umm and ahh over policies for months – sometimes years – mayors simply get things done.

Anywhere between 5.8 billion and 7.6 billion people – based on the range of population growth estimates for 2050 – could therefore be living in cities within the next four decades.

These cities – some of which are global cities (such as London) or megacities (such as Tokyo), with more than 10 million inhabitants – are the centre of financial, social and environmental innovation. They are the key to sustainable growth and a sustainable future. And their mayors can and must lead this transition.

“Teddy Kollek, the mayor of Jerusalem, said, ‘I’ll fix your sewers if you spare me your sermons’”, Barber said at a recent Interdependence Day conference in Dublin.

“He was speaking to Jews and Muslims and Christians; he was saying it was his job to fix problems, to operate beyond ideologies.”

Also in attendance at the event was the lord mayor of Belfast, Máirtín Ó Muilleoir, whose comments typified why mayors can help kickstart an evolution, encouraging sustainable entrepreneurism, innovation and invention.

“I don’t control policing or education; I can’t fix potholes”, he said. “But I do have the power to be relentlessly positive for Belfast and galvanise the energy of the city.”

In London, few would disagree that Boris Johnson has acted as a great spokesperson for the capital. Since his election in 2008, he has become one of London’s most ardent champions, with David Cameron calling him a “brilliant mayor” at the Conservative party conference this week.

Meanwhile across the pond in the US, Michael Bloomberg – mayor of New York City – is a vocal supporter of environmental and social issues. Speaking about the C40 Cities initiative, which brings together the world’s megacities in an effort to reduce greenhouse gas emissions, Bloomberg said, “While international negotiations continue to make incremental progress, C40 Cities are forging ahead. Collectively they have taken more than 4,700 actions to tackle climate change, and the will to do more is stronger than ever. As innovators and practitioners, our cities are at the forefront of this issue – arguably the greatest challenge of our time.”

Woolf was president of the Law Society of England and Wales in 2006/07 and is currently alderman for Candlewick in London. She is set to replace current lord mayor Roger Gifford in November, becoming only the second woman to hold the position since 1189.

During a keynote speech at the UK Sustainable Investment and Finance Association’s (UKSIF) annual lecture recently, she outlined the size of the task ahead for the City of London. Her appearance was timely, with nominations for the sustainable finance category of the 2013/14 Sustainable City Awards opening in the same week.

The City’s challenge, Woolf said, is to find new areas of long-term finance. She pointed to the work of Tomorrow’s Company, a London-based thinktank that aims to change the behaviour of the business world, and described short-termism as an “elephant in the room” for the City.

She added, “The City’s cluster of businesses, institutions and talent can contribute to long-term value creation and sustainable development – that’s jobs – and the planet – which is of course not just protection of the environment or natural resources, but also a resilience – and also help the wider society develop solutions to the challenges of the 21st century.

“I have to say, when you think about it, that creates opportunities for us which are utterly delicious.”

It was encouraging to hear the future lord mayor speak so eloquently and passionately about the City’s place at the forefront of sustainability (former Tory MP Peter Ainsworth told Blue & Green Tomorrow recently, “The City doesn’t exist in a moral vacuum; it’s part of everything we do. Its purpose is to make good stuff happen. It’s a service industry that forgot the word ‘service’”) and about long-termism specifically.

The City of London can be proud that it now has her as its champion. One former colleague said, “She was always a trailblazer. Forget the fact that she was a woman.”

However, the final word must go to Theodore Roosevelt, the 26th US president, who, in a 1926 essay called The City in Modern Life, wrote, “We cannot afford merely to sit down and deplore the evils of city life as inevitable, when cities are constantly growing, both absolutely and relatively.

“We must set ourselves vigorously about the task of improving them; and this task is now well begun.”