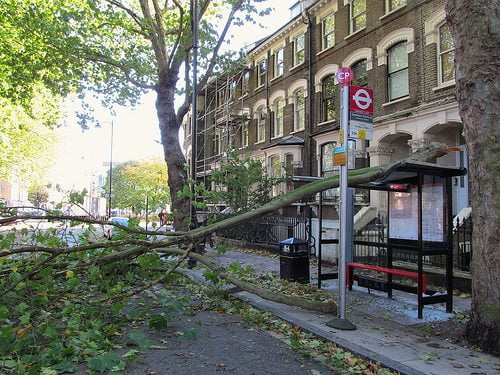 The St Jude’s Day storm coverage seemed a little apocalyptic. One listener to BBC Radio 4’s Today programme, frustrated at the time devoted to the storm, described it on Monday as “ripples in my teacup”. It may not have been on the scale of 1987 or 1953, but any loss of life or property is tragic. What is profoundly worrying is the UK’s lack of resilience when faced with abnormal weather events.

Whether you rubbish climate science or accept it, everyone pretty much agrees that our climate is changing. Weather is part of our climate. The vast majority of climate scientists agree we will experience more extreme weather events. Again, we can all agree our weather will be different. As much as we moan about it, we really don’t want our weather to become that different.

In the UK, we have become accustomed to a relatively benign climate, warmed as we are, by the Gulf Stream. Without this steady stream of warmth our winters could be more than 5C cooler, bringing the average December temperature in London to about 2C, and sending northerly parts of the British Isles deep into minus territory. The system is changing.

In global terms, a relatively minor storm shut down our national rail network, closed ports and airports and left hundreds of thousands without power. If there are to be more storms and more floods in the coming decades, we are ill-prepared as a nation.

Building on floodplains continues (some 10,000 houses per year), as does covering draining surfaces with tarmac, paving slabs and concrete, which means more households are at risk of flooding and there is more water flowing through narrower routes. We need gravel drives, gardens and fields to allow water to drain away naturally.

Water that runs down roads and drains into rivers and out to sea doesn’t replenish the water table and our reservoirs.

Deforestation of our hills and valleys may have left them as beautiful, desolate places, but the subsequent erosion of water-absorbent soil means catastrophes like Boscastle (2004), Cockermouth (2009) and Hebden Bridge (2012) are more likely.

We abandoned our flood defences for many years and the risks to life and property increased. In England alone, 5.2m houses are at risk of flooding and the annual costs of flood damage are estimated to the £1.1 billion. Parliament estimates this cost rising to £27 billion by 2080. The current spending of £370m per year will need to rise to £1 billion by 2035.

Following parliament’s damning cross-party assessment of the government’s “insufficient” and “shortsighted” flood defence spending, environment secretary Owen Paterson told this year’s Conservative party conference, “Over the course of this [five-year] parliament we will be spending £2.3 billion on protecting households and businesses against flooding. In practical terms, this will see 165,000 properties better protected in 2015 than they were in 2010.”

His comments were welcomed by the Association of British Insurers, which had worked with the Department for Environment, Food and Rural Affairs (Defra) and the industry to create Flood Re, a not-for-profit fund that will ensure flood insurance remains affordable and available to homeowners at high flood risk.

The details are still being thrashed out so we shall see what the final funds looks like, but surely it makes sense not to build on floodplains in the first place, as this all sounds a little but like a dreaded ‘subsidy’.

But these are sticking plasters: 5.2m houses are at risk of flooding and more are being built each year.

Extreme weather events can easily overwhelm flood defences and storm drains. Flood defences do nothing against high winds, heavy snowfall and drought. If these events happen every hundred years or so we can probably cope, although those unlucky enough to live through such an event would rightly disagree.

We desperately need joined up government which connects the dots between all types of wet and dry weather, irresponsible property development, deforestation, dogmatic anti-renewable policies and our future resilience in the face of abnormal or extreme weather.

If, like us, you believe that burning fossil fuels is a key cause of climate change and the resultant extreme weather, then connecting the dots back to what you invest in and which energy supplier you use is also essential.

Laissez-faire may appeal to some politicians reliving the 1980s as economic policy, but it is wreaking havoc with our environment and society, and will inevitably harm our economy.