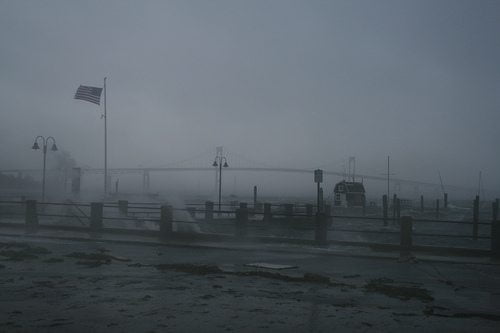 Scientists find cause for rise in urban flooding

Scientists at the University of South Florida’s College of Marine Science investigating the increasing risk of ‘compound flooding’ for major US cities have found that flooding risk is greatest for cities along the Atlantic and Gulf coasts when strong storm surge and high rainfall amounts occur together.

“Nearly 40 percent of the U.S. population resides in coastal counties,” said study lead author Thomas Wahl of the University of South Florida College of Marine Science and the University of Siegen in Germany. “Flooding can have devastating impacts for these low-lying, densely populated and heavily developed regions and have wide-ranging social, economic and environmental consequences.”

Their analysis focused on the joint occurrence of the two distinct flooding sources in coastal regions – storm surge and high precipitation – that can result in direct run-off (pluvial) and increased river discharge (fluvial).

They concluded that “the complex interplay between storm surge and precipitation can lead to, or exacerbate, the impacts of flooding in coastal zones through multiple mechanisms.”

“Whether or not all of these mechanisms are relevant at a particular site strongly depends on the local setting,” explained Wahl who, along with colleagues from the University of South Florida (USF), the University of Maine, and the University of Siegen, in Germany, collected and analyzed data sets for storm surge and rainfall for over 30 American cities along the Atlantic, Gulf and Pacific coasts. Their analysis included many of the 17 U.S. port cities with populations over one million, for which the occurrence of compound flooding had not been previously assessed.

Armed with data reaching back into the 1950s, and some data from the beginning 20th century for some sites, they determined that the risk for compound flooding was higher for cities along the Atlantic and Gulf coasts than for those on the Pacific coast. Consequently, they looked more closely at selected regions along the Atlantic coast.

When they analyzed the data specific for New York City in greater detail, the researchers determined that storm surges in New York City (where compound flooding events are increasing) are accompanied by heavy precipitation when a high pressure system stretches from Newfoundland south over the North Atlantic from where moist air is transported into the low-pressure system causing the storm surge. They also noted that the extreme flooding in that region during “Hurricane Sandy” in 2012 was the result of extreme storm surge but that the rainfall during that storm was (fortunately) “small in the historical context for such an event.”

Overall, they found that the number of compound flooding events has been steadily increasing over the past century along many stretches of coastline.

“Our results demonstrate the importance of assessing compound flooding and its links to weather and climate, but we need more research at local scales to determine impacts,” concluded Wahl and his colleagues. “That research will require complex, integrated modeling experiments that investigate surface and drainage flows and include storm surge, rainfall and river discharge. In light of climate variability and change, it will be important to develop a detailed understanding of future patterns of storm surge and high precipitation amounts occurring in tandem.”