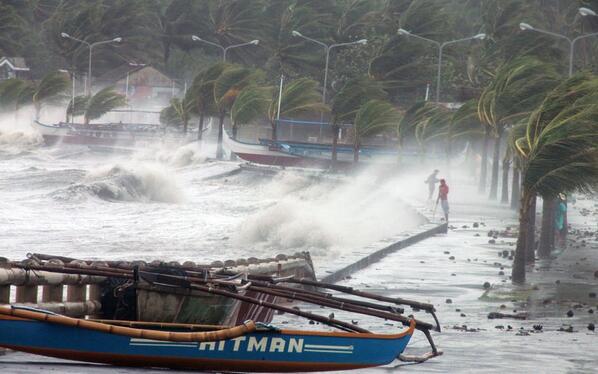 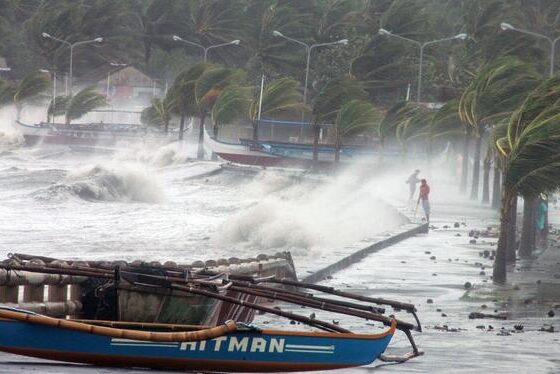 Millions of people have been forced to take shelter after what may be the strongest storm to ever make landfall batters the Philippines.

Official reports say at least three people have died, with confirmation yet to be received about a possible fourth, as sustained winds of up to 320 km/h (199mph) were recorded.

As many as 12 million people live in the path of the category five super typhoon, in a region still recovering from the effects of a powerful earthquake which struck last month.

Philippines president Benigno Aquino III has allegedly resorted to using threats of force to remove people living in high-risk areas from their homes in a bid to save lives. It has been reported that many families are reluctant to leave their possessions for fear of looting.

“No typhoon can bring Filipinos to their knees if we’ll be united”, Aquino said in a televised address.

Anna Lindenfors, Save the Children’s director for the Philippines, warned that the charity expects the damage to be “extensive and devastating“.

“Children are going to be particularly affected, swept away in floods, hit by falling debris and separated from their families in the chaos. We expect thousands to be left homeless,” she said.

Meanwhile, Jeff Masters, meteorology director at Weather Underground, said that the damage might prove to be “perhaps the greatest wind damage any city on Earth has endured from a tropical cyclone in the past century”.

Typhoon Haiyan is the 24th tropical storm to hit the Philippines this year alone. The islands lie in the most active typhoon belt on the planet.

After sweeping through the Philippines, the storm will turn towards the South China sea over the weekend. Meteorologists fear that it could gather even more intensity as it approaches the Vietnamese coast.

Research published in 2010 by a research group at the Japan Agency for Marine-Earth Science and Technology predicted that the frequency of violent typhoons, with winds exceeding 194 km/h (120.5mph), could increase 10-fold by the end of this century due to climate change.

Speaking in February, the then director of the Philippines National Disaster Risk Reduction and Management Council Benito Ramos said that climate change posed an “existential threat” to the islands.

“We are mainstreaming climate change in all government departments and policies. If we don’t adapt and adjust, we all agree we are heading for disaster“, he added.

The most recent report from the Intergovernmental Panel on Climate Change (IPCC) also observed that “it is virtually certain that the frequency and intensity of the strongest tropical cyclones in the North Atlantic has increased since the 1970s.”

A recent study revealed that human-caused global warming may have played a crucial role in half of the extreme events occurred in 2012. Meanwhile scientists have warned that rising temperatures linked to manmade climate change would contribute to sea level rise in US coastal cities, as well as extreme weather in Australia. In July, the UN called the period of 2001 to 2010 a decade of “unprecedented extremes”.