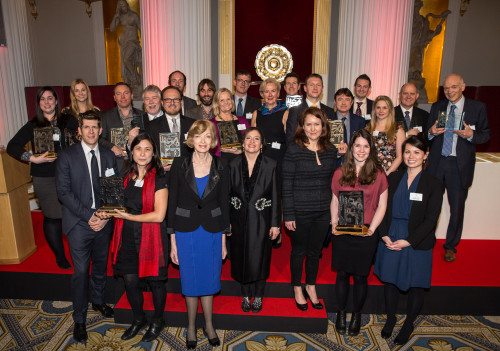 On 3rd March The green carpet was rolled out at Mansion House for the Sustainable City Awards where businesses from across the UK won ‘Green Oscars’ for their innovation and commitment to sustainability.

More than 200 guests attended the 15th annual event, established by the City of London Corporation in 2001, as 14 awards were presented by host former Lord Mayor Dame Fiona Woolf DBE.

Air quality at the forefront

The study concluded air pollution has a substantial impact on many chronic long term conditions, increasing strokes and heart attacks in susceptible individuals. It also adversely effects the development of the foetus, including lung development, and now there is compelling evidence that air pollution is associated with new onset asthma in children and adults.

It was thus fitting that Client Earth’s campaign, ‘Fighting for the right to breathe clean air’ received the Air Quality Award. The organisation of activist lawyers committed to securing a healthy planet brought a major case against the UK government over their ongoing failure to comply with EU limits for nitrogen dioxide (NO2) – which they should have met in 2010.

Client Earth drew attention to the fact that up to 50,000 people die each year as a result of air pollution, according to Defra’s newest figures. In April last year, they won the case, their biggest yet, in the UK Supreme Court – the culmination of a five-year legal battle.

An emerging trend towards contributing positively to society has seen sustainability as the driving force amongst businesses, entrepreneurs and employees when choosing careers. The latest IEMA annual practitioner survey found a 10% rise in job satisfaction among people who moved into sustainable careers indicating that sustainability has become the career change of choice.

This year the focus was on health and wellbeing. In April, a YouGov survey found that more than half of all employees suffer from burnout, severe anxiety, and physical and emotional exhaustion in the workplace. The Awards recognised those organisations across the UK who put staff wellbeing at the forefront of their business strategy in sectors as diverse as buildings, legal battles, climate change and urban planning.

Global Japanese financial firm Nomura accepted the Health and Wellbeing award for its innovative work to recognise their people are their most important assets, and creating a work environment and culture that promotes and sustains all aspects of health and wellbeing.

Nomura caters for more than 3,000 staff in London offices, with GPs, nurses, gyms, personal trainers, a nutritionist and parenting support among the services on offer. Activities such as health weeks and gym challenges are further motivation for staff to maintain good health. Nomura’s offering allows them compete for the best candidates, retain staff and create a better work-life balance for their employees.

The City Of London Corporation’s March 2014 research report, ‘Best Practice in Promoting Employee Health and Wellbeing in the City of London’, emphasises the importance of maintaining employee health in a city which leads the world in global financial services. The nature of the financial services sector – working across international time zones, in a competitive culture – means some employee health issues are more significant than others for the sector.

Nomura’s proactive approach to health and wellbeing is part of a developing workplace trend noted in a 2015 Heart of the City Impact Report. Positively, 90 per cent of respondents – part of the organisation’s Newcomers business membership programme – revealed their senior staff are engaged in supporting the development of health and wellbeing activities to support staff in the workplace.

Innovative engineering company Siemens took to the stage three times as their London-based global headquarters; ‘The Crystal’ took home the Resource Conservation, Sustainable Buildings and Sustainable Places Awards.  Built in 2012, the impressive building is home to the world’s largest exhibition on the future of cities, the world’s most sustainable events venue, and office space for Siemens.

The Crystal recycles 100% of its waste through a zero-to-landfill system, offers a bicycle scheme, and houses a charging station for electric cars. Siemens’ 360 degree community approach includes a local hiring scheme where front of house jobs are initially advertised exclusively in the borough of Newham, while their community garden and Education Officer – who works with local schools – ensures the local community is supported and benefiting from Siemens presence in the area.

Activist lawyers Client Earth took away the most prestigious award of the evening, the Sustainable City Awards Winner’s trophy that recognises the organisation that best demonstrates a pioneering approach to innovation and leadership in sustainability.

Client Earth, who is committed to securing a healthy planet, brought a major case against the UK government over their ongoing failure to comply with EU limits for nitrogen dioxide (NO2) – which they should have met in 2010.

The organisation drew attention to the fact that up to 50,000 people die each year as a result of air pollution, according to Defra’s newest figures. In April last year, they won the case, their biggest yet, in the UK Supreme Court – the culmination of a five-year legal battle.

The Lord Mayor of the City of London, Jeffrey Mountevans, says: “The UK Sustainable City Awards recognise the sustainability initiatives of organisations big or small, across every sector of business. This year, we recognised firms that are pioneering sustainable business development by putting the health and wellbeing of staff at the forefront of their business agenda. The high calibre of this year’s Awards applicants demonstrate that it’s not enough to tick boxes in the annual report, but that real determination and prioritization – at every level in an organization, and across all activities – is needed to achieve change. It is this commitment that is enabling our sustainable and environmental champions to make a significant impact to the strength and health of our workforce, commerce and communities.”