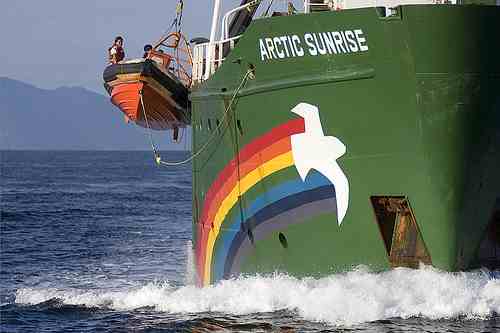 A crewmember from Brazil and a British videographer face between 10 and 15 years in jail as part of a Greenpeace group that protested against oil drilling in the Arctic.

Similar charges are expected to be brought against another 14 of the 30 activists who were stopped by the Russian coastguard while planning to hijack an oil rig in the Barents Sea in September. This is despite Russian president Vladimir Putin saying that they were clearly “not pirates”.

The offence means that the campaigners that were onboard of the Arctic Sunrise can face from 10 to 15 years in prison. So far, the only two to be officially charged have been the Brazilian activist Ana Paula Alminhana and the British videographer Kieron Bryan, whose parents told the Guardian they were “extremely worried” about their son.

“The courageous crew of the Greenpeace ship Arctic Sunrise protested at that Gazprom rig because they felt compelled to bear witness to the slow but unrelenting destruction of the Arctic”, Naidoo added.

“The ice is retreating, oil companies are moving north to drill for the fuels that are driving that melting, species are at risk, including our own.”

Meanwhile, a Murmansk court ruled in September that 22 activists would be held in jail for two months without being sentenced.