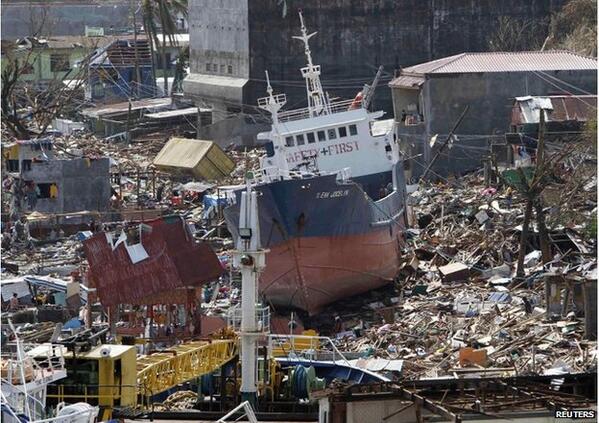 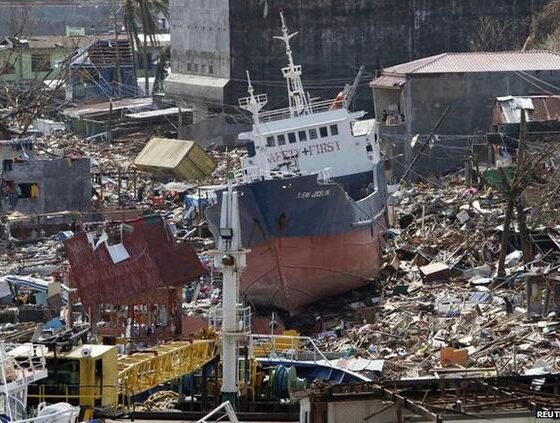 Over 10,000 people are feared to have died as Typhoon Haiyan, one of the strongest storms to ever make landfall, tore through the Philippines this weekend.

The head of the Philippine Red Cross described the aftermath as “absolute bedlam“, as rescue workers struggled to reach survivors in areas cut off by the storm.

“There’s an awful lot of casualties, a lot of people dead all over the place, a lot of destruction”, Richard Gordon told the BBC.

Jane Cocking, the humanitarian director for Oxfam, said aid workers had found “complete devastation… entire parts of the coastline just disappeared, and sizable trees just bent over and [were] thrown about like matchsticks.”

Officials confirmed a death toll of 942 as of Monday afternoon local time, but warn that the figure will rise as reports come in. It is estimated that up to 10,000 people have died in the city of Tacloban, while hundreds more have died elsewhere.

Officials in Tacloban have urged President Benigno Aquino III to declare a state of emergency or martial law in Tacloban, after survivors looted food and water from abandoned stores and homes.

In response, the UK has sent specialists to assist with the rescue and recovery efforts, while the Department for International Development has pledged to provide over £5m to humanitarian aid efforts on the ground.

Scientists have warned that global warming will increase the chances of similarly powerful storms forming in the future.

Prof Will Steffen, a researcher at the Australian National University and a member of the Australian Climate Council, explained that hotter and wetter conditions are already affecting storms such as Haiyan.

“Once [cyclones] do form, they get most of their energy from the surface waters of the ocean”, he said.

“We know sea-surface temperatures are warming pretty much around the planet, so that’s a pretty direct influence of climate change on the nature of the storm.”

Earlier studies have suggested that the frequency of tropical cyclones will decrease as the climate changes, but said that those that do occur will be stronger as a result.

Naderev Saño, the Philippines’ climate change commissioner and its lead negotiator at the international climate talks that opened in Warsaw on Monday, told Responding To Climate Change that he feared for the safety of his family.

“The first message I got from my brother was short, to say he was alive”, he said. “The second was that he had been burying dead friends, relatives and strangers. He said with his own two hands he had piled up close to 40 dead people.”

Saño said that this latest disaster had made him more determined than ever to fight for an ambitious climate deal.

“Climate change means we face a future where super typhoons will no longer be one-in-one hundred year events […] and we refuse to accept a process that will allow a future where Super Typhoons would happen every year, and that’s what’s happening.

“We have not seen any money from the rich countries to help us to adapt […] We cannot go on like this. It cannot be a way of life that we end up running always from storms”, he added.

Haiyan has since reached northern Vietnam, where reports say 11 people have been killed, though it has weakened to a tropical storm.