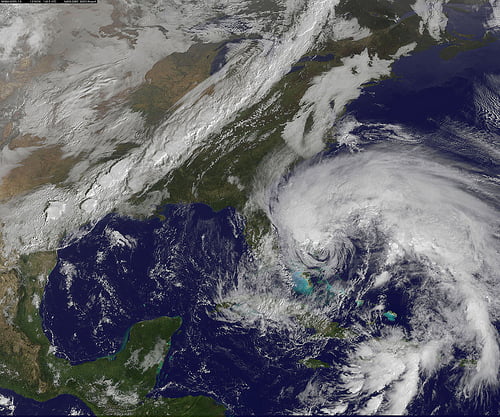 The scale of Hurricane Sandy is unprecedented, with much of America’s east coast affected in some capacity. But is its devastation a sign of things to come? Welcome to the rest of our lives.

It could be seen to be insensitive to discuss the cause of Hurricane Sandy, when a large number of lives and livelihoods are likely to be lost or affected during its journey. But it needs to be discussed and we urgently need to learn from our mistakes.

“Anyone who says there is not a dramatic change in weather patterns is denying reality”, said Andrew Cuomo, Governor of New York, in a statement today.

So let’s address the facts. Climate change is happening; North America is seeing more droughts, the North Atlantic is seeing more tropical storms (see chart below) and more intense hurricanes; ocean heat content is over double what it was for the bulk of the 20th century and Arctic sea ice reached its lowest ever level earlier this year.

And while many journalists and commentators have covered all bases by not categorically stating that climate change is the real driver behind Hurricane Sandy – and other extreme weather events – all the evidence points to it being a key influence.

“For example, the oceans have warmed, providing more energy for storms. And the Earth’s atmosphere has warmed, so it retains more moisture, which is drawn into storms and is then dumped on us.”

Speaking to Blue & Green Tomorrow in May, Asher Minns, communications and centre manager at The Tyndall Centre – a partnership of eight UK universities that are sharing expertise to develop responses to climate change – said, “Though you can never say that one extreme weather is due to climate change, there is an increasing likelihood that there are particular weather patterns that are only explained if you factor manmade emissions into the calculations.”

Indeed, the 2003 heat wave in Europe, for example, can only be explained when an increase of greenhouse gas in the atmosphere is factored in, as relayed in an investigation by a group of scientists for the science journal Nature in 2004.

The Intergovernmental Panel on Climate Change (IPCC) – the foremost climate change research organisation in the world – has connected extreme weather events to climate change in many reports – the most recent of which was published in March this year.

What’s more, the world’s largest reinsurance firm, Munich Re – which essentially insures insurance companies – is so certain that extreme weather events are inflated by climate change that it places the issue right at the centre of its business plan.

“For the insurance industry the effects of global warming are clearly a game changer”, it said.

“The enormous losses translate into increasing payouts by insurers which ultimately reduce their bottom lines. Consumers are also affected through higher insurance rates in the long haul.”

We know that climate scientists across the globe are in unified agreement that human activity is the primary cause of climate change. As James Balog put it in the soon-to-be-released documentary film, Chasing Ice, scientists are not arguing about this anymore.

But it’s important to distinguish the difference between climate and weather at this point. A popular argument from the climate sceptic or denier camp is that the weather fluctuates all the time, and that just because there is snow or a cold spell, global warming can’t be happening. This is a big fallacy in climate debates.

With less than a week to go until the presidential election, Barack Obama is presented with an opportunity to display strong leadership in the face of extreme adversity – at a time when direction and reassurance is what the American people desperately need.

As the current incumbent of the White House, Obama’s performance and character during this period of crisis over the next few days might just decide his fate for the next four years.

Cutting back on fossil fuels now won’t stop Hurricane Sandy from wreaking havoc across the east coast over the next few days. We can only hope that its impact will be accounted for, its death toll minimal and its long-lasting effects limited

But sadly, this seems unlikely.

It remains to be seen how long the US – and indeed, the rest of the world – will go on witnessing and cleaning up after devastatingly extreme weather events, despite strong evidence that climate change is ramping up the frequency of such occurrences. The human race, after all, is only so resilient.

Investment in clean and sustainable energy, agriculture and transport is desperately needed if we are to quell the impact of future disasters and leave a hospitable planet to future generations.

Let’s hope we learn from these mistakes.

Blue & Green Tomorrow writes about sustainability and, in particular, sustainable investment. Investment trade outstrips real trade 26:1 and shapes the world we live on. We’re currently crowdfunding our next few reports. Please support us at http://www.sponsume.com/project/blue-green-tomorrow.