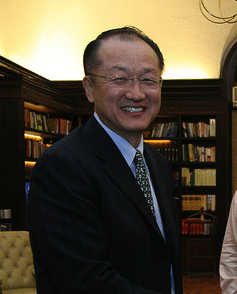 Jim Yong Kim, president of the World Bank, has warned that conflict and social unrest could escalate if the world fails to create a plan to address climate change and its impacts.

Kim’s comments follow the publication of the United Nation’s latest Intergovernmental Panel on Climate Change (IPCC) report, which warned that no nation would be untouched by the effects of climate change.

The report cautioned that the effects of global warming would impact on food prices, as well as many other areas, because the production of vital crops is predicted to drop by 2050, leading to a rise in poverty and conflict.

In an interview with the Guardian, Kim said he believes battles over food and water would begin within the next five to ten years as climate change begins to affect food production. He urged campaigners and scientists to work together to create a solution.

He used the example of HIV to demonstrate how working together can result in quicker and more effective solutions. Kim described the success of campaigners and scientists working in coalition to develop a treatment for HIV as “unbelievable”.

In order to keep global warming below the internationally agreed limit of 2C, Kim said the world needed a plan to show it was serious about tackling the issue. He outlined four areas in which the World Bank could help fight climate change: investing in cleaner cities, finding a stable price for carbon, removing fuel subsidises and developing climate smart agriculture.

“We’re trying to help and we find ourselves being more involved then I think anyone at the bank had predicted even a couple of years ago. We’ve got to put the plan together,” Kim added.