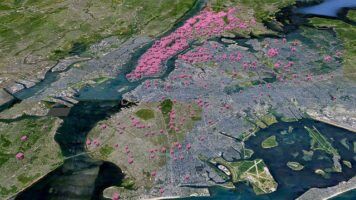 Drayson Technologies is today announcing its plans to build the world’s most advanced air pollution map, for Greater London, and new partnerships with Gophr and Inmarsat to achieve this aim. UK courier company Gophr will equip 50 of its bicycle couriers with CleanSpace Tags – portable air pollution sensors created by Drayson Technologies that are powered by its revolutionary Freevolt technology. The couriers, all based in London, will map pollution levels on their journeys across the capital, collecting data that will help to build a real-time map of London’s air pollution as they carry out their same-day deliveries. The couriers will also be equipped with LoRa trackers by Inmarsat, the global mobile satellite communications services provider; enabling highly accurate, real time location and height data to be collected on the move.

The carbon monoxide data collected from the CleanSpace Tags will feed into the Air Map, an interactive map that will show the pollution levels at the location of each courier, in real time. With the couriers predicted to travel over 17,000 miles each month, the amount of indoor and outdoor air pollution data collected will be on a scale that has never been achieved previously. The collected data is anonymised and fed into the CleanSpace mobile application, alongside other Tag users’ data, to provide users with personal and actionable air pollution data.

The LoRa™ (Long Range) trackers will track the location of the Gophr couriers via satellite without having to use mobile Location Based Services which drain battery life. This provides more accurate readings on the move, with the need for fewer access points to cover the whole area of a city.

The CleanSpace Tag is a personal air pollution smart sensor that enables people to measure and monitor the pollution levels in the air they breathe, wherever they are, at any time. It is the first product to be powered by Freevolt™, a revolutionary technology launched by Drayson Technologies, that harvests and recycles wasted wireless signals to power low-energy devices so their batteries never need changing. The CleanSpace Tag works alongside the CleanSpace mobile application, allowing users to view their exposure to air pollution through an interactive Air Map.

Gophr and Inmarsat are the first partners announced in Drayson Technologies’ plan to create the world’s most advanced air pollution map of a city. Further organisations, groups and individuals will be equipped with CleanSpace Tags in the coming weeks and months in order to collect data, gather insights and help address the issue of air pollution in the capital.

Lord Paul Drayson, Chairman and CEO, Drayson Technologies, said, “the CleanSpace network aims to provide the world’s most advanced air pollution map using thousands of personal sensors powered by Freevolt. This partnership brings together the combined expertise and commitment of Drayson Technologies, Gophr and Inmarsat so that people in London can see the air they breathe and help to create, not just a smart city – but a smarter society.”

Seb Robert, Founder, Gophr, commented, “we’re a company that’s proud to be using the most innovative technology solutions available to make the world a better place to live in. As a courier service built by, and with bicycle couriers from day one, we’re proud to be able to use our resources to map air pollution in the capital. Making the most of our bike couriers to deliver a great same-day service, and a healthier future for London.”

Creating an accurate air pollution map at breathing height will contribute to the better understanding of how to combat this issue and improve air quality in London.

Greg Ewert, President for Enterprise Markets, Inmarsat, said, “air pollution is a global problem, contributing to about 40,000 early deaths a year in the UK alone.  This is the first example of a public LoRa™ network in London and we hope this partnership with Gophr and Drayson will be the first of many city air pollution projects.”