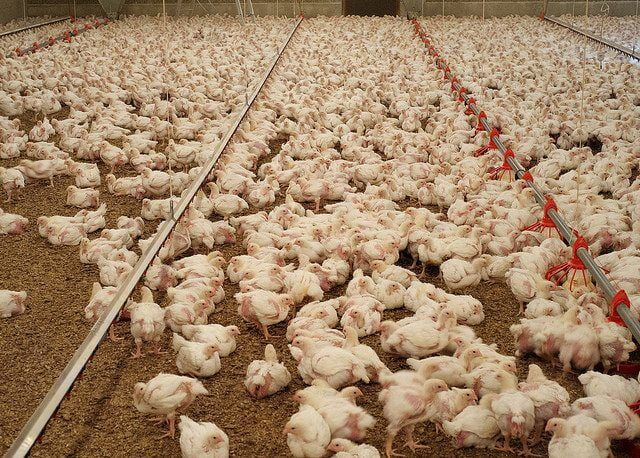 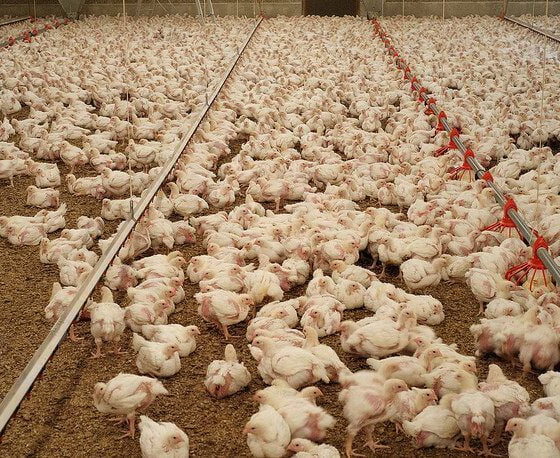 Each year as the global chicken consumption increases, the suffering of meat chickens remains one of the largest causes of global animal suffering, says World Animal Protection, the international animal welfare charity.

In recent years’ consumers, have demanded higher welfare products and several food companies have gathered pace by making pledges to go cage-free for egg laying hens. But the plight of meat chickens remains hidden from sight with most people not knowing where the meat on their plate comes from.

Here are ten facts about factory-farmed chicken raised for their meat that you should know:

10 things you need to know about factory farmed chickens:

1. Sixty billion chickens are raised every year across the world to be sold for their meat.
40 billion of these will be raised in huge, crowded sheds, or cages, kept in dismal conditions that can cause them painful heart, skin, lung and bone problems and immense stress.
2. Chicken is now one of the world’s most popular meats. Between 1996-2016, demand for chicken meat grew almost 40% in the European Union, 89% in China and 183% in India.
3. A factory-farmed chicken lives an average of 42 days. In the wild, a chicken could expect to live several years.
4. These chickens put on more than 50g every day, but their immune systems, organs and legs cannot keep up, meaning they can suffer a range of physical problems.
5. Because of their shortened life span, chickens bred for meat may look fully-grown, but they are still babies when they are slaughtered.
6. Specific breeds of chicken are bred only for meat, genetically selected for their ability to reach “slaughter weight” as fast as possible.
7. Around 2,000 meat chickens are slaughtered every second.
8. By the time they are ready for slaughter, many meat chickens live in a space smaller than an A4 piece of paper.
9. Chickens love “dust-bathing”: digging a shallow hole to jump in and covering themselves in dry dust and dirt. It’s an important natural behaviour, keeping their feathers in good condition and removing parasites. In many countries, factory grown chickens are prevented from dust-bathing and carrying out other important behaviours, such as pecking, scratching and perching.
10. Seven out of ten consumers of chicken in the UK polled for World Animal Protection (78%) admitted that, when buying chicken at a fast-food outlet, they never ask where it comes from.

World Animal Protection CEO, Steve McIvor said: “This conveyer belt of rapidly grown chickens comes at a price. Behind the world’s favourite meat is an unacceptable cost of suffering that is increasing as the global demand for chicken grows.”

As the demand for chicken meat continues to rise, World Animal Protection believes consumers should no longer be kept in the dark, as the charity releases a new global poll revealing just how little we know about the chicken on our plate.

The poll – of 12,000 people worldwide – shows that although people are concerned about what they eat, very few know where that meat has come from.

What the poll tells us about UK consumer views:

• Four out of five (85%) did not know that a chicken will only live on average 42 days
• Of those who eat chicken, four out of five (79%) said they would not buy chicken from a fast-food chain if they knew it had suffered serious health problems because of living in a cramped industrial farm
• seven out of ten (78%) never ask where their chicken comes from at fast-food outlets.

World Animal Protection is challenging fast food retailers such as KFC to improve the welfare of billions of chickens, because mass production is one of the biggest causes of animal suffering in the world. The organisation wants to see:

• The use of chicken breeds that grow at a slower, more natural rate
• More space for the chickens
• More things for the chickens to engage with and explore, such as perches and hay bales
• The introduction of natural light in the sheds

Steve McIvor continues: “We need to expose the woefully poor conditions that many factory-grown chickens are living in. They are suffering in secret, behind closed doors and away from public view. KFC has a huge stake in the market with more than 18,000 outlets in 115 countries; we want to see them use their global influence to show they care about the welfare of chickens.”