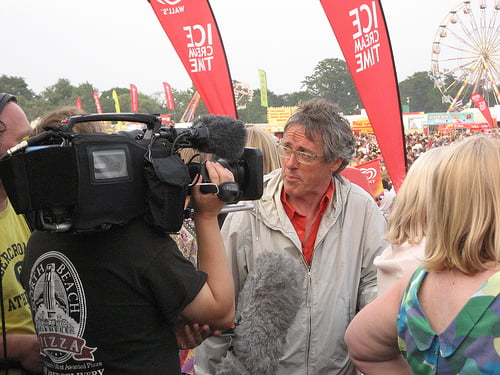 Many of us who were around at the time were big fans of Alas Smith & Jones (1984-1998). Alas, Griff Rhys Jones has recently become embroiled in a row over energy policy and the location of solar farms.

It has been known for some time that Rhys Jones objected to renewable energy generally; solar and wind farms more specifically. We wrote about his views this time last year as he was press ganged into the Delingpolean faction.

His objections came to fore when he protested against a solar farm near his home in Suffolk. He told the BBC, “We’ve been conned into assuming that when we put in renewables it doesn’t matter that they blight the countryside because they’re saving the planet.”

This prompted a natural response in the Guardian from Solarcentury’s Jeremy Leggett, in which he argued, “Someone has to live near solar farms”.

In turn, Rhys Jones responded to Leggett in a two-page letter which is worth reading in full to fully understand his position. This response was headlined by the Guardian as Rhys Jones attacking green energy’s ‘random desecration’ of countryside.

We like Griff Rhys Jones; we like the Guardian (we used to like the Daily Telegraph until it was hijacked by the provisional wing of the Conservative party and horsemen of the climate apocalypse).  This is our take on the issue.

Rhys Jones is president of Civic Voice, who describe themselves as, “The national charity for the civic movement in England. We make places more attractive, enjoyable and distinctive. We promote civic pride.”

He has a right, like anyone, to comment on aesthetics. He makes the point clearly that he does not “dispute at all that we should try and reduce our carbon emissions.” He adds, “I am not a climate change sceptic.”

On wind farms, he says, “Some wind turbines have gone offshore. The populations of the east coast of England have their fair share of them. Yes, we have some in our backyard. I certainly know where they are. They do, as you say, have to go somewhere.”  Accepting they ‘have to go somewhere’ is hardly the view of hardliner.

Admittedly, describing renewable energy as a “subsidy-hunting free enterprise” is misinformed and likely to trigger a response. We regularly point out that subsidies for fossil fuels outstrip renewables 2.6:1. Shielding and supporting infant industries has long been part of our economic strategy. Oil and gas is not an infant industry; renewables are.

Regardless, Rhys Jones’ central argument is “large-scale solar farms should be on brownfield sites” and that we should use “wasteland” first and foremost: “There is wasteland, even in lovely Suffolk. There are warehouse roofs and superstore roofs, car park roofs and, yes, school roofs. There are disused quarries and motorway wastelands. I think it is legitimate to ask why they are not being used more.”

He goes on to make a strong defence of nuclear power as an alternative to renewable energy and fossil fuels. In response to Leggett’s query on what Rhys Jones would do when the lights go out, “I am unlikely to rely on solar power. I am rather conscious of energy saving and tend to only use lights at night. Solar power doesn’t operate then. So I will probably depend on a nuclear power plant. There is already one in Suffolk.

“Sizewell B produces as much electrical energy as about 550,000 acres of wall to wall solar parks. Sizewell C is planned. On the ground, though surrounded with a buffer construction zone, Sizewell C will actually take up less of the countryside than this one solar park, and will generate over a thousand times more energy every year, an even greater output in fact than Sizewell B.”

Nuclear power comes with a unique set of delightful problems. Getting planning agreement in the first place; picking a future proof technology; investing billions to build, run and then decommission them; storing radioactive waste and dealing with proliferation. Then there’s the Three Mile Island, Chernobyl and Fukushima issue.

The letter’s arguments about agricultural land use are disingenuous. Livestock can easily graze beneath solar panels and between wind farm pylons. They can’t graze at nuclear, coal, gas or oil power station.

It’s quite easy to take down a solar or wind farm after they come to the end of their natural life. Not so with fossil fuels and nuclear.

So, if we stick to the central argument of Rhys Jones’s letter, it’s about the placing of renewable installations in sympathy to the environment and local communities. We agree with Leggett and we agree with Rhys Jones.

We need to massively increase our renewable energy generation to reduce our carbon emissions and because it is clean, limitless and domestic – especially as offshore wind, tidal and wave technology matures, and becomes a valuable export industry.

We also need to be sympathetic to those who speak out against our crazy planning laws and wish to protect the aesthetic of the countryside such as the National Trust, Campaign for the Protection of Rural England and Civic Voice, in the shape of Rhys Jones.

As we wrote in The Guide to Limitless Clean Energy 2013, the government has been dithering over nuclear and is divided over renewables. This is silly: “Two reports ignored by government demonstrate that the UK could become a net exporter of energy if it produced and implemented a coherent energy strategy, with a pivotal role of renewables.

“The National Grid’s ‘Future Energy Scenario’ report 2012 indicated that the UK could become a net exporter of energy by the 2020s, by delivering on the commitment to have 15% of energy generated by renewables. Meanwhile, the ‘Offshore Valuation’ demonstrated that using just a third of our offshore energy potential could make us a net energy exporter.”