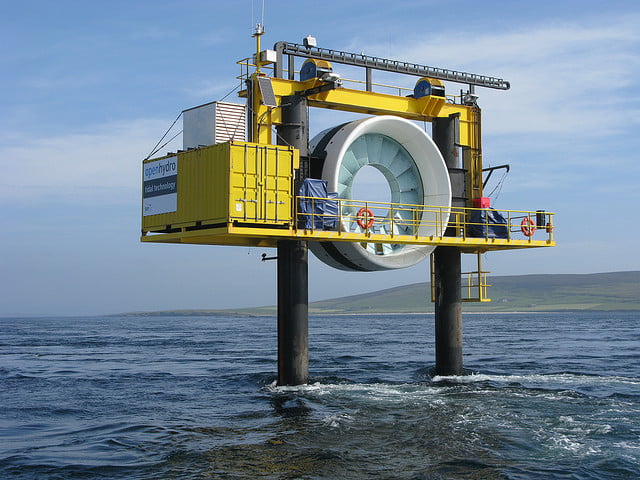 Critics of renewables are often given powerful platforms to voice their opinions. This vocal minority skew the debate, especially when polls suggest the majority of the public is in favour. But, as Emma Websdale outlines, the story of clean, renewable, domestic energy is far greater than just wind and solar.

Renewables undoubtedly have a place in our society and the majority of the UK public is behind them. And in terms of a concerted push towards a clean energy supply, you get the feeling it’s about when, not if.

For those familiar with renewables, it is more than likely that an image of a solar panel perched on top of a house or a wind turbine stretching its large blades across the countryside pop into mind. However, the renewable energy industry is much more dynamic than these two common sights.

There are other renewables that don’t make the headlines as often. Most of these can be harnessed on a similarly large-scale, while some have been designed specifically to fit small off-grid applications, even in remote and rural areas.

Geothermal energy involves creating electricity from hot water that has been trapped underground. When hot magma rises close to the Earth’s surface, it heats up underground water supplies, trapping it in between porous rock and creating reservoirs and streams of very hot water.

Deep wells can tap into this heat and harness its steam to power turbines used for creating electricity, heating and cooling.

In 2010, the Geothermal Energy Association estimated that 10,715MW of geothermal technology was installed across the world – a  20% increase since 2005.

It does come at a cost, though. Geothermal development could impact the environment negatively; creating threats to local groundwater and increasing seismicity caused from drilling activity. Most developers therefore undertake the highest level of environmental protection possible, and manage toxic waste to prevent water contamination and ground damage.

In recent years, a much safer way of utilising geothermal energy on a smaller scale has been developed. By using geothermal heat pumps designed to tap into heat resources, buildings can become heated and cooled.

Currently, the range and size of viable resources is continuing to grow, with the largest group of geothermal power plants located at The Geysers, a geothermal field in California, US.

The US Department of Energy estimated that enhanced geothermal systems (EGS) could produce at least 100,000MW of electricity over the next 50 years.

Geothermal power requires no fuel, and is therefore immune to fluctuations in fuel costs.

Tidal power is the only form of energy that produces energy directly from the naturally occurring motions of the Earth-moon system. The tidal forces produced by the moon and sun, in combinations with the Earth’s rotation, are responsible for generating tides that can be harnessed for electricity.

Capturing tidal energy is generally environmentally friendly, and the predictability of tidal forces makes it much more efficient than wind and solar. Tidal farms operate similarly to offshore wind turbines, with many tidal stream generators being rotated underwater by the water’s movement.

The UK acts as a great ambassador in harnessing electricity from tidal energy. Tidal Lagoon Swansea Bay Ltd recently announced its plans to build the first tidal farm of its kind within the UK – a 250MW development at Swansea Bay. Providing clean power to 100,000 homes, chief executive of the project, Mark Shorrock, predicts that over time, tidal lagoons could contribute up to 10% of the UK’s energy.

Using energy from organic matter has been a way of generating energy for thousands of years, ever since people started burning wood for energy and heat. Biomass works from burning the sun’s energy captured by plants.

Today, wood still stands as the largest source of biomass, but residues from agriculture of forestry, plants and industrial waste are also used to generate electricity.

Using biomass has the potential to greatly reduce greenhouse gas emissions. Although it generates around the same amount of carbon dioxide as fossil fuels, the system of planting new trees and plants means that carbon dioxide is taken back up, making the system carbon neutral.

Biomass is a very versatile form of renewable energy, and it’s expected that nearly half of Europe’s renewables in 2020. If crops and plants for biomass are grown ethically and responsibly, it can be done in a way to create better soil, water and air quality.

Unfortunately, much of the biomass used commercially today is from unsustainable sources. However, switchgrass, a native, prairie grass of the US, is far easier to grow responsibly than most food crops, making it a promising resource for bioenergy.

These are just three examples of technologies thriving in the renewable energy industry. Others include anaerobic digestion, ocean thermal and plants generating hydrogen, as well as wind and solar. And the list will keep on growing.

Writing in Blue & Green Tomorrow’s Guide to Limitless Clean Energy 2012, Andrew Morton, account director of footprint renewables, said, “Perhaps the best way to achieve economic growth is by fully exploiting our range of renewable energy resources in and around the UK.”

Thankfully, the UK is becoming rich in renewables and by further exploring our options, we really can become true ambassadors, showing that the renewable industry is flourishing and really is here to stay.