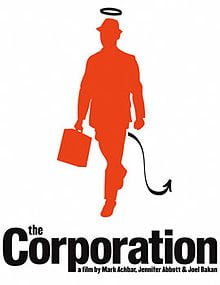 The Corporation is based on a book of the same name written by Joel Bakan. The documentary is critical of the modern day corporation, its global economic dominance and the impact it is having on the environment.

It considers the corporation’s legal status as a class of person and evaluates its behaviour towards society as a psychiatrist might evaluate an ordinary person.

The film argues that a corporation’s sole reason for being is to enhance its powers and profits. The corporation is compared to a sociopath in its behaviour, for example lacking empathy, irresponsible and manipulative. One of the underlying messages is that humanity cannot survive by continuing to consume natural resources. Overall the film concludes that the corporate system is flawed.

The documentary uses interviews and archive footage to back up its argument and the fact and figures are presented in a compelling way. As a result, the film makes a convincing and educational case.

At almost two-and-half hours, this documentary is lengthy but it is informative and insightful all the way through. The film could benefit from some alternative views, as it is slightly one-sided, allowing the viewer to weigh up the facts and draw their own conclusion.

Despite this, The Corporation is eye-opening and thought-provoking. A definite must watch.