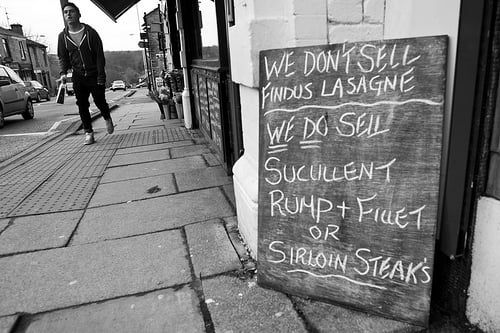 The government’s response to the horsemeat scandal has been shifting from blaming foreigners to blaming business. This strategy shows the vacuum of leadership and responsibility at the heart of modern governments, populated by career politicians and an increasingly narrow social group.

The purpose of business is profit.

We have consistently argued that this should be done in a sustainable fashion. Not only because this is in the interest of the planet and its people, but also because it is in the enlightened self-interest of the businesses.

Unenlightened businesses that profit from the increased use of finite resources, such as oil, gas, coal, minerals and water companies, will increasingly lobby and campaign to limit the limits on their short-term profiteering. They always have and always will. Clearly, the more enlightened ones are trying to explore alternatives, but they still want to protect their unsustainable cash cows in the meantime.

In retail, the big four supermarkets (Tesco, Sainsbury’s, Asda and Morrisons) have actively fought regulation to curb their market share, planning rules and property portfolio expansion, unethical supplier management and complex tax affairs. While they present a well-polished, consumer-friendly face, their primary motive is that by doing so, you are more likely to shop there and increase their profits.

Big business isn’t immoral, it’s amoral. Anyone who tells you otherwise is either naive or lying.

And that’s where governments come in, or should come in. A government’s primary role is to protect all of its people from enemies, both foreign and domestic. The enemy in the modern world is not just the flag-waving lunatic with the big guns and big bombs, but the unethical and rapacious practices of large and transnational corporations.

All responsible progress in business has come from external law and regulation. Accounting rules, contract law, health and safety, employment rights, environmental safe guards, planning laws and consumer protection may seem like niceties or fettering to some economic thinkers, but they have been essential in developing a vibrant and mostly benign economic settlement between business and society, between capital and labour.

It is wrong of government therefore to lay the sole blame at business for maximising operational efficiency within an ever relaxing regulatory framework. Consumers can and will increasingly hold them to account.

Industrialists, once they have maximised efficiency, like to maintain the status quo. Businesses can afford lobbyists and fund parties, but governments are of the people, by the people and for the people. Otherwise, they are nothing. Government is not of businesses, by businesses and for businesses – although it often feels that way.

If a government or parliament cannot effectively stand up to big business and create a regulatory system that protects the people first and foremost, and effectively resources that system’s monitoring (without demonising tax, food, safety and health inspectors), they should move on and let someone who can do the job properly take on the role.

Recognition by the people of this reality might explain the rapid growth of campaign groups and the rapid decline in voter turnout.

If politicians were a brand, they are yesterday’s brand.