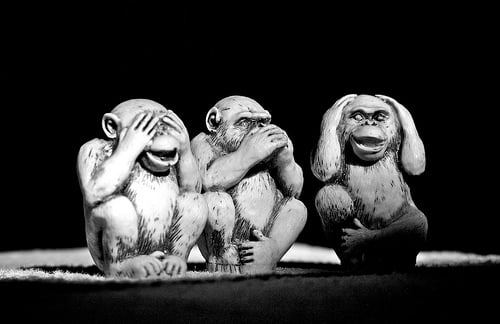 Dictionaries define research as, “The systematic investigation into and study of materials and sources in order to establish facts and reach new conclusions.” By any standard, impartial research into climate change has set a very high bar in proving human causation.

Climate change will affect investment performance. When the world’s biggest investors call for urgent action on climate change, anyone working in finance should sit up and listen and probably include it in their investment research and analysis.

We were therefore surprised to see what looked like a climate sceptic tweet from Hargreaves Landsdown head of research, Mark Dampier. Hargreaves Lansdown is a major financial services provider and asset management specialist. Its mission is “to help investors make more of their investments by providing the best information, the best service and the best prices.”

Dampier regularly appears in the national press decrying the folly of ethical investment. It is hard to believe any systematic investigations on the impact of climate change on investment performance are happening, if his starting point is that those who accept the science have a “zealot self-righteous approach of pro-climate side.”

Accepting the science and being right is not self-righteous. We accept the consensus science on gravity, so why not climate?

Futhermore, understanding the impact of climate change on our planet and future generations and demanding urgent action is not zealotry.

We would also like to think most people are ‘pro-climate’. What is the alternative? No climate. Anti-climate?

While Dampier’s opinions are clearly his own, his perspective goes to the heart of Hargreaves Lansdown’s “best” advice to the client. He is head of research after all.

It is widely recognised that climate change will have a significant effect on fund and equity performance in the coming years. Commodities, and the economies that depend on them as both importers and exporters, will become increasingly volatile and unstable.

In an email exchange with Blue & Green Tomorrow in March, when asked, “Are there no moral or ethical issues to consider when investing?” Dampier said it was “for an individual to decide, not me for them.”

Presumably, the financial services industry therefore needs to advise on the long-term risks in continuing as we are. Advocating ever-greater investment in mining and fossil fuels exacerbates the risks to his clients, who investment managers have a duty to protect. Scepticism of the science suggests one is ignoring that systemic risk.

Dampier also tweeted the myth that it is our “absurd energy policy predicated on climate change” (renewable energy subsidies, we guess) that are driving up energy prices, rather than the considerably larger subsidies for fossil fuels, rising wholesale prices for fossil fuels and the alleged collusion of Big Energy and Big Oil in fixing prices. 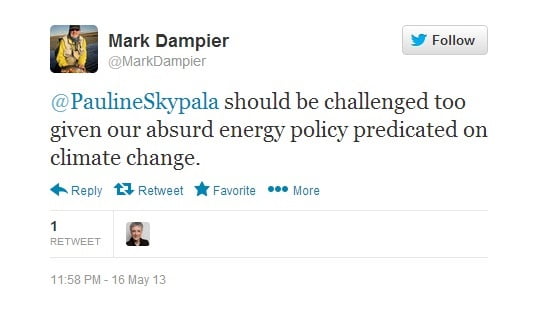 Adding context to the brevity of Twitter, Dampier expanded on his comments to Blue & Green Tomorrow: “It is of course my job to challenge and, climate change or not, our energy policy seems governed by it, meaning thousands of people won’t be able to afford to heat themselves. Solar and wind as yet at least are not a replacement.

“We need to get to the stage that you buy these irrespective of climate etc, because they are the most efficient and the cheapest.”

He also tweets the lie that global temperatures have not increased for 15 years. He questions, “What happened to hot summers promised!?” But the science never said summers would be sunnier; just hotter and wetter. 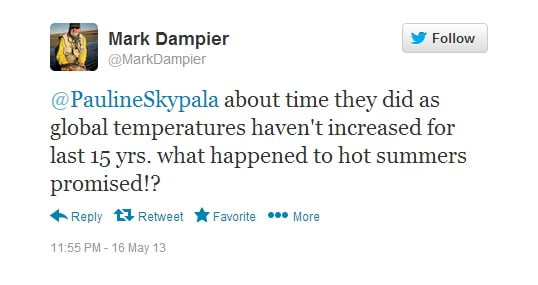 Even casual research into global temperatures shows that over the long-term, “Empirical measurements of the Earth’s heat content show the planet is still accumulating heat and global warming is still happening. Surface temperatures can show short-term cooling when heat is exchanged between the atmosphere and the ocean, which has a much greater heat capacity than the air.”

As climate scientist James Hansen pointed out on BBC Radio 4’s Today programme this morning to Sarah Montague (who was trotting out the same lazy journalism about temperatures stopping), air particulates produced by the increased burning of fossil fuels in China and India have a short-term cooling effect as they reflect sunlight back into space. The key point is that this is short-term effect. Over time, this means we are storing a far greater problem as CO2 levels rise.

It is a well-known fact that air particulates cool the planet. Volcanoes, plane contrails, clouds and pollution are some of those cooling factors. The problem is that this cooling effect is short-lived and we will reach a tipping point where no amount of particulates can halt the accumulating heat. The record summer melting of the big mirror at the top of our planet (the Arctic) should even give sceptics cause for concern. Though many simply rub their hands over the mineral rights and new trading routes.

Dampier also bizarrely tweeted, “We live in a democracy too so the sceptics should be allowed a voice, silencing them just increases scepticism!”

Non-scientists and, more importantly, non-climate scientists are given acres of column inches and airtime in the national press and on television and radio to spout their climate sceptic nonsense. Delingpole, Monckton and Lawson do not have a science degree between them.

Far from silenced, they are given equal billing in the broadcast media and are overwhelmingly disseminated in the climate sceptic press. If this is silenced, we can’t imagine how cacophonous they would be if they were given free rein.

Just before we published this piece, Dampier tweeted, “But in politics and science unless you sign up for the new religion you don’t have a career.” 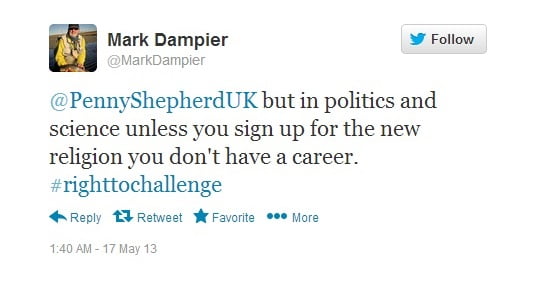 In politics, George Osborne, Nigel Lawson and Peter Lilley all seem to be doing quite nicely without ‘signing up to the new religion’. In science, consensus is not a dirty word; nor is it a religion. Quite the opposite, in fact. Calling it one means you do not understand the very principles of scientific research and have nothing valuable to contribute to the debate.

Were this the 19th century, we’re fairly confident these people would be happy to recommend investing in slavery due to the excellent returns.

After all, ethics “are for an individual to decide, not me for them.”

– “A great misrepresentation of my views, but interesting to note that anyone who questions anything on climate change is immediately attacked”

B&GT responds: Defending our children against those who would seek to ruin their future and profit from the fallout, is not an attack. It is our responsibility. The investments you recommend are an attack on our planet and its people.

B&GT responds: Germany is investing in coal as it has divested from nuclear in the wake of the Fukushima disaster. It has nothing to do with renewables.

B&GT responds: Renewables are far less subsidised than fossil fuels. This creates expected consequenes such as the funding of climate denying organisations.