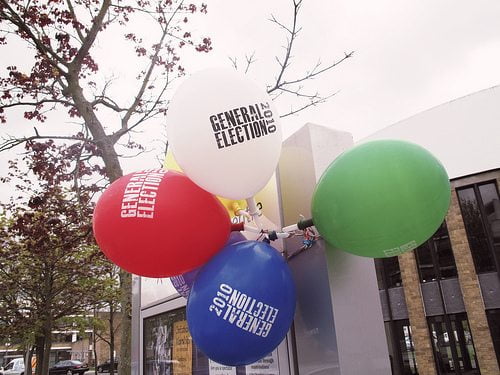 We recently spotted a link to a site called Vote for Policies that tested policy preference during the 2010 general election. With 92 weeks to go until the next general election, Simon Leadbetter digs deeper.

In the local elections, we urged readers to vote Green. This was not because we agreed with every policy of the Green party, but to maintain pressure on the major parties to pursue sustainable policies. This was due to the consistent evidence that mainstream parties were significantly out of touch with the public mood on sustainability issues.

In a recent letter to the Guardian, concerning the recent Labour/Unite Falkirk imbroglio, Laurie Marks of Harrow in Middlesex stated, “Opinion polls on just about every major issue, be it renationalising the railways, abolishing tuition fees, taxing the rich or nuclear disarmament (with the sole exception of immigration), show that public opinion is firmly to the left of every major party; it has been shifting that way for over a decade while Westminster has shifted ever further right.”

“The responses of 300,000 people on the Vote for Policies website […] show that the most popular policies are those of the most left wing party in the test: the Greens.”

Vote for policies, not personalities

Vote for Policies is a social enterprise founded by Matt Chocqueel-Mangan. It is designed to make it easy to compare what the political parties are promising to do. Its stated aim is to help voters make informed, unbiased decision about who to vote for.

Speaking to Blue & Green Tomorrow, Chocqueel-Mangan said, “My job as a digital consultant means that if something doesn’t work, it’s because there is a usability problem – not a user problem. I decided to take the same approach with solving the issue of voter engagement.

“Rather than assuming people don’t want to take part or are unable to express an opinion, I found a way to make it easier.”

By comparing the policies from six UK political parties (Conservatives, Labour, Lib Dems, Green party, UKIP and BNP) on a range of key issues, site visitors were able to show which parties someone should vote for. Some 337,920 surveys were completed; far larger than any poll. The Financial Times described it as a “test well worth taking.”

Chocqueel-Mangan said, “I was surprised by how quickly it spread. There was no marketing plan. It’s amazing what a simple idea and social media can achieve together!”

Based on policies alone, the popular vote would have been: 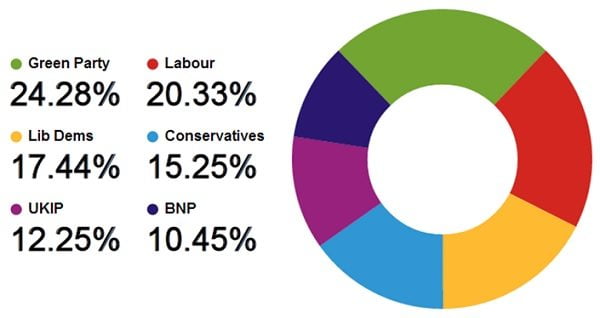 We asked Chocqueel-Mangan if it changed his vote (“Yes it did. And it felt quite liberating!”), and whether he thought it changed the vote of others. He said, “The comments we received suggested lots of people were surprised by their results, and felt confident enough to change their vote, or they decided to vote for the first time ever. We’ll be tracking more behavioural outcomes next time around so we’ll get real data on that.”

Plugging these into UK Polling Report’s basic swing calculator, we see the major parties would still retain control of the House of Commons: 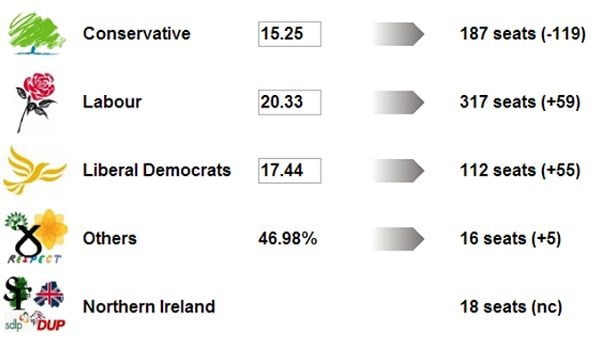 Labour would be the largest single party, but short of an overall majority by nine seats.

Politicians who cry crocodile tears about voter apathy and falling turnout, but defend the current first past the post system, don’t really believe in representative democracy. If an election doesn’t ‘work’ (i.e. people turn out and vote), it’s because there is a usability problem – not a voter problem.

The discrepancy between seats, voter and elector share is striking: 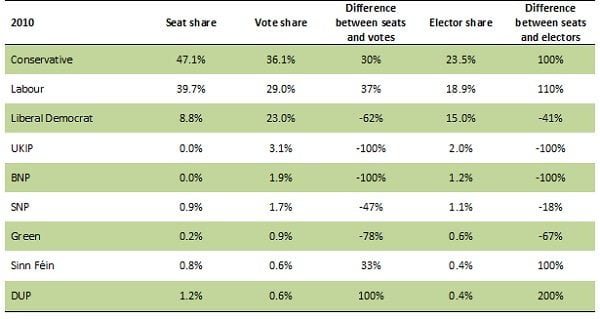 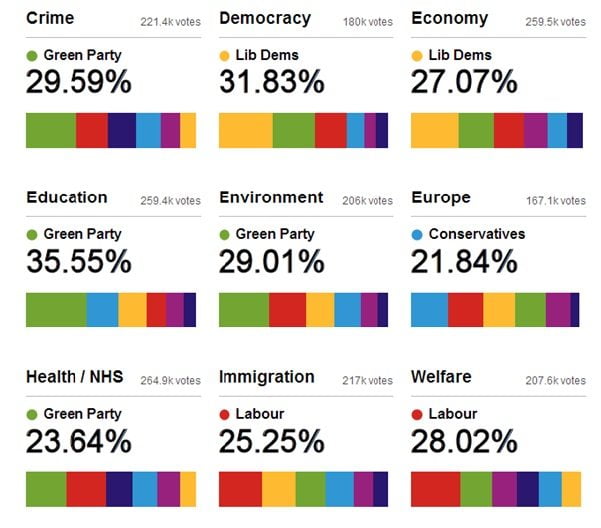 “From what the people who used the site told me, there is still real fear of wasting a vote if you don’t support the main parties”, said Chocqueel-Mangan, when asked what he thought explained the success of minor parties on policies but their failure to gain votes.

“I tried to help counter this by showing how other people in your constituency think – and next time with even more people using the site, we could give more people the confidence to vote according to their policy preferences.”

Tomorrow we’ll look at the votes of the party leaders. Whatever the media would have us believe, we operate a parliamentary system as opposed to presidential one. A party leader still needs to win their constituency to be able to prime minister. If he or she is the leader of the party that commands the largest number of seats overall, then they get the keys to number 10.