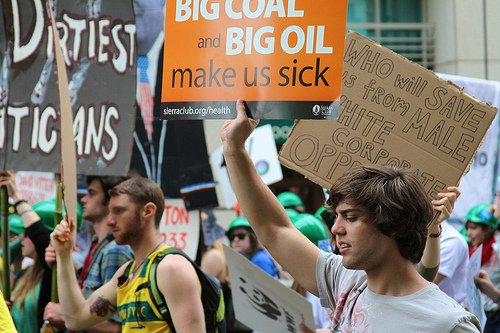 This week, another naughty Big Energy company has had its wrist gently slapped for viscously ripping off customers. EDF is fighting its own battles. At some point, an elected government and its self-styled consumer champions, the regulators, will stand up for the people and break these malicious and inefficient oligopolies up.

Before Big Energy it was Big Supermarkets with horse burgers. Before them it was Big Banks. Ben Goldacre highlighted the behaviour of Big Pharma. We frequently comment on the reckless behaviour of Big Oil and Big Tobacco. The Guardian reports that, sadly but predictably, US Big Tech (Facebook, Apple and Google) has been creeping into political lobbying, following anti-trust activities against Microsoft.

The biggest companies skew markets as much, if not more than, the public sector. They drive down employee and consumer rights, bully or bankrupt governments, intimidate or overwhelm regulators and wreck the environment.

While they often fund vital research and development, they are equally as guilty of stifling disruptive innovation through aggressive patenting and lobbying for self-interest. They demand ever-lighter regulation and even more support through lower taxes, subsidies, benefit funding for low wages and regular bailouts from governments. Their goal appears to be to privatise profit, nationalise loss, and the recreation of an unfettered free market utopia of the 19th century, without any of the concomitant risks.

In the unregulated utopia of the 19th century, we had slavery, child labour among those as young as nine, hundred-hour working weeks, no consumer protection, poisonous smog, unequal pay for women, countless deaths and injuries at work, the environment used as a dumping ground, criminally low pay and widespread discrimination. Businesses were also allowed to fail.

Some parts of the UK and the world still suffer some or all of these degradations, as we have successfully exported our economic policies, dirtier manufacturing and corporate bad behaviour overseas.

To deal with the inevitable social, economic and environmental fallout of unregulated or unfettered capitalism, forward-thinking governments of all political parties introduced controls.

Over time and against powerful opposition, we painstakingly established social, employee, consumer and environmental protections. Some will rightly argue it was often too little and usually too slow.

However, these protections are fragile and now increasingly threatened by the biddable nature of today’s politicians and their raucous cheerleaders in the press; both of whom are funded by the corporate shilling.

Politicians extolling the virtues of ‘free’ markets, while defending and being underwritten by the oligopolistic players who distort them, is intellectually dishonest. For an oligopoly to exist, there needs to be a few large firms that can protect their dominance through significant barriers to entry. A compliant government and weak regulator helps. The revolving door between ministers, regulators and private operators remains unhealthy and anti-competitive.

This oligopolistic behaviour sounds a lot like domestic energy (top five have 75%), supermarkets (top five have 84%), banks (top five have 85% of current accounts), mobile providers (top five have 100%), and global pharmaceuticals, oil and tobacco players, not to mention certain media empires. The top two – News International (The Sun, The Times and Sunday sisters) has 34% of daily newspaper sales and Daily Mail Group has 22% – have over half of national newspapers read each morning.

While there is little we can easily do to global corporations, we could clean up our own backyard and give some teeth to the Competition Commission.

What could we practically do? Limiting the market shares, and therefore size, of monopoly utilities (water, energy) to fewer than 15% would create a more competitive environment. It would still mean seven players could control a market. Seven per cent might be a better goal to create 15 players. Only those companies that have independently-audited, excellent customer service and sustainable practices would be allowed to go beyond that level, and then only for as long as they maintain the satisfaction. To grow you would have to be great.

This would make it easier for greater competition in utilities, but if enacted more widely could similarly improve retail, financial services and could dramatically improve competition, innovation and better customer outcomes.

This is not the bleeding heart appeal of a closet statist magazine. We just would not want to live in a country without the essential regulations of the 19th and 20th centuries. This is a call-to-arms for genuinely competitive, genuinely sustainable capitalism, rather than the oligopolistic and irresponsible corporate kleptocracy we have created.

Major changes needed to redirect investment onto a long-term path