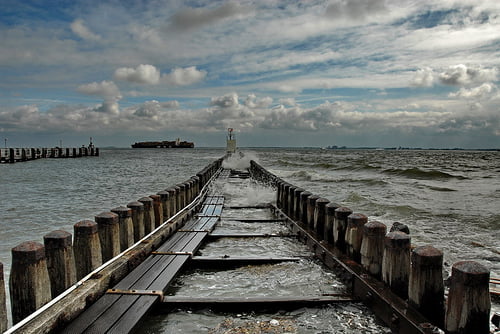 On this day in 1953: North Sea floods devastate UK and Netherlands

The flood is one of the most destructive natural disasters ever recorded in the UK. Along with the 326 killed, 30,000 people had to be evacuated from their homes and 24,000 properties were damaged along the east coast, where the surge reached as far as 2 miles inland in some places.

Canvey Island and the village of Jaywick in Essex were among the worst affected places in the UK, leading to the tragic deaths of 58 and 37 lives respectively. The ferry MV Princess Victoria sank in severe gales with the loss of 224 lives, along with many fishing trawlers.

The flooding led to major investments in flood defences and the Thames Barrier project was started to protect London from a similar event. The Barrier was finally opened in 1984. High water levels have risen by 20cm (8 inches) over the last century and Britain is tilting down in the south and east due to the post-glacial rebound, a legacy of the last ice age.

The one in every hundred-year event happened twice more in the next 60 years. Another North Sea flood struck Germany in February 1962 with the loss of 347 lives, and again in November 2007, affecting the coasts of the UK, Norway, Denmark, Germany, Belgium and the Netherlands. In a sign of improved warnings and flood defences, no lives were lost.

As the sea warms, it expands and the increasingly erratic nature of our weather means the coincidence of extreme weather with a high spring tide, which occurs twice per month, has become more likely.

The prevailing view among those responsible for our coast is to allow nature to take its course. The natural erosion of the coast creates sediment that is washed further along the coast and acts as a natural defence against the sea.

Our shallow, sinking east coast will be significantly altered over the coming decades and many coastal communities will be lost. According to the National Environment Research Council (NERC), England has some of the fastest retreating coastlines in Europe.

Speaking to the BBC on the 50th anniversary of the flood in 2003, Sean Clarke of the Met Office said, “With climate change as an additional factor, surges will happen more often, and the risk is increasing. The return period for a 1.5 metre surge in the North Sea – the interval over which you’d expect it to happen again at least once – is 120 years at the moment.

“By the 2080s, we expect a 1.5 metre storm surge could happen in the North Sea at least once every seven years. But our warning systems are a lot better than they were then, so loss of life on the scale of 1953 is pretty unlikely.”

After the snow, the floods