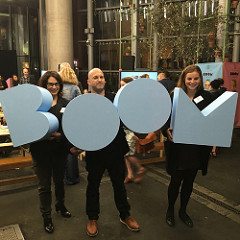 The Organic Market is Booming

The Best of Organic Market (BOOM) Awards, which recognise pioneering organic products, remarkable retailers and restaurants and bloggers who promote organic food and living, were held earlier this month. The winners were chosen by an independent judging panel of well-known chefs, restauranteurs, food writers and specialists, celebrity foodies and consumer judges. Former chef and food stylist for Jamie Oliver, Anna Jones, was is year’s BOOM Ambassador.

Winners of the prestigious BOOM (Best of Organic Market) Awards were announced on 11 May at a glittering ceremony held at Borough Market Hall in London. This year’s winning products were as varied as they were delicious – ranging from organic wine to indulgent ice-creams, gourmet cheese, quality veg and ethical meat and poultry.

This year, the BOOMs went interactive, using social media to stir up interest and the addition of a new ‘Nation’s Favourite’ category gave people a chance to choose their favourite product. The winner is particularly exciting for those with a sweet tooth.

This year’s winners were:

Cafes and Restaurants – The Edinburgh Larder at Whitmuir Farm (Edinburgh)

Anna Jones she said: “I believe that food and eating should be joyful, and good organic produce is at the centre of this joy. There has been a real shift towards people wanting to know the origins of what they’re eating – from where it was grown to who planted the seeds -and organic produce has these values at its core. I am excited to celebrate the individuals and businesses that are giving us some brilliant choices about what we buy and eat.”

Competition for the 2016 BOOMs was really tough – with almost 500 entries across all categories, the winning products highlight the innovation currently happening in organic food. According to the Soil Association 2016 Organic Market Report, the UK organic market is in its third year of steady growth and is set to break the £2 billion threshold very shortly.

This year’s BOOM category sponsors were Fyffes, OTB and Yeo Valley and sponsors of the award ceremony were Thomas Ridley Foodservice, Ocado and London & Scottish.