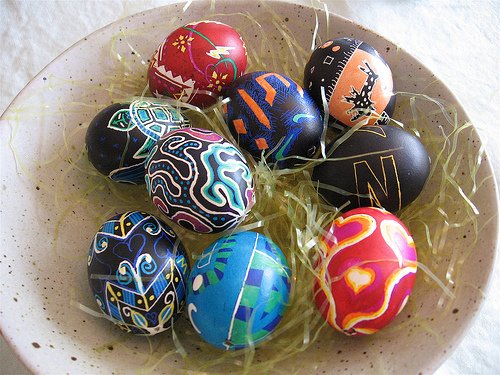 Beyond the religious celebrations, Easter brings much joy for kids, young and old—usually in the form of large hollow chocolate eggs at great expense to parents, grandparents, aunts, uncles and beyond.

But hang on one moment. Aren’t large, round items notoriously difficult to package? And aren’t hollow coco-ovoids rather a waste? At least you bought Fairtrade chocolate… right?

My nephew and niece proudly showed me their veritable hoard of eggs displayed on the dining room table (covering it almost entirely, in fact). I didn’t have the forethought to note down the weight of all the chocolate at the time—I was too busy persuading them not to eat it all at once. However, I suspect that the net weight was disappointingly low (better for the teeth in the long run, I suppose).

For all that is done in trying to reduce the amount of packaging and to promote improved recycling, some times of the year just don’t lend themselves to the real spirit of it all.

Easter is one of those times. Vast rows of wastefully packaged luxury goods line shelves that require constant re-stocking (did I mention stacking inefficiency?). We all fall for the marketing magic.

Even better, prices of those uneconomical chocolate treats apparently rocketed this year—something my barber was rather outspoken about—with The Guardian reporting: “The cost of Easter eggs has shot up a whopping 21% on average in a year, research reveals, with price rises of 65% for perennial family favourites such as Cadbury’s Twirl and Dairy Milk, and 140% for the Galaxy Minstrel egg, which has soared from £2.50 to £6”. Quite shocking, really.

Now, I don’t want to appear an Easter Scrooge—“Let them eat [chocolate]!”—but it would be pleasant if more manufacturers invested a little of their hard-earned (ahem) profits into more recyclable materials for the protection of that oh-so-precious cargo.

Jo Swinson, Liberal Democrat MP for East Dunbartonshire, has been campaigning for packaging reduction with an annual report that began in 2007. And while some manufacturers are improving, others are woeful.

Swinson told The Guardian in a recent article, “A few manufacturers are hiding behind green credentials with packaging that isn’t easily recyclable by the majority of consumers. Manufacturers know that their plastic boxes aren’t widely recycled and yet they continue to use them, despite other companies showing how Easter eggs can be packaged with a mind to efficiency and recyclability”.

It might seem like a trifling (truffling?) matter, but according to WRAP, “Consumer perceptions around over-packaging are often linked to specific product lines and seasonal confectionery is one area of concern. The iconic Easter egg came out top of the list for excessive packaging in a 2008 poll on ‘Public attitudes to packaging’”. Evidently, it’s not just Swinson and I.

In Swinson’s Easter Egg Packaging: Annual Progress Report 2012 a major concern is that packaging remains inconsistently recyclable across local authorities. Another overall negative trend is “one of complacency”.

However, it’s not all bad news: “Nestlé is the first major confectioner to have an entire Easter egg range packaged with 100% widely recyclable materials. Plastic has been replaced with cardboard and film is now compostable. Over six years, 726 tonnes of plastic have been diverted from landfill”, the report states. This is good news, if the majority of people consuming those eggs go on to recycle the packaging.

Montezuma’s Easter Eco-eggs get a special “Good Practice” mention for their innovative packaging, which is made of two parts: “a sturdy biodegradable paper outer shell/sleeve and foil wrapping”. Commendable.

So, why am I telling you this now—post Easter—you ask? Well, in the hope that you’ll go that extra mile in recycling the egg box mountain you appear to have collected, and perhaps in the further hope that you’ll give a little more thought to eco-conscious and Fairtrade options from here on in (for which, we recommend Ethical Superstore).