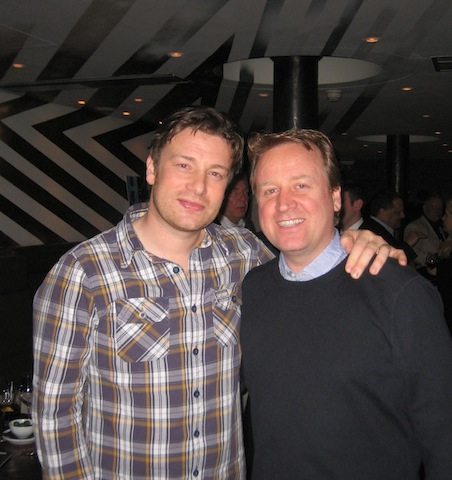 He was Jamie Oliver’s right-hand man at Fifteen Restaurant, his team have cooked for the Prince of Wales and he helped set up the UK’s first eco-friendly restaurant. And now, Jamie Grainger-Smith has big plans to integrate sustainability right into the heart of food, drink and hospitality.

George Bernard Shaw once said, “There is no love sincerer than the love of food.” And this comes from an Irishman who spent the vast majority of his 94 years on this planet in the arts, writing music, plays, essays and novels.

When he died in 1950, Britain was still recovering from the effects of the second world war. Food supplies such as meat, sugar and cheese were still rationed, and rationing wouldn’t completely end for four years.

Throughout the 50s and 60s, the UK’s food culture reverted back to its pre-war state, with traditional meat and two-veg dishes appearing on most dinner tables at mealtimes. The 70s brought with it an influx of foreign cuisines – Italian, Indian and Chinese – and into the 80s, fast food was already a well-established option.

The rising popularity of celebrity chefs and TV cooking shows in the 90s, though, introduced a new wave of cooking. All of a sudden, it was cool to experiment with food at home. And in 2013, this is more apparent now than ever.

“Food has become the new rock’n’roll”, says Jamie Grainger-Smith. As an award-winning restaurateur, who has worked with the likes of Jamie Oliver, Alastair Little, Rose Gray and Ruthie Rogers at the River Cafe and Ben O’Donoghue, he knows a thing or two about the industry and where it’s heading. And where it’s heading, he adds unequivocally, is towards sustainability.

“Everybody loves food; it’s very emotional. But we’ve got to take responsibility for our food. We can’t keep on taking and taking; there has to be a balance”, he says over a Fairtrade coffee at The Hub – a social enterprise incubation unit in the heart of King’s Cross.

“It’s about not overindulging and instead just taking what we need. It’s about preparing and looking after the future. And it’s about caring. Sustainability is a massive word. It gets twisted up in many different ways, but it’s mostly about responsibility for me. That’s fundamental.” 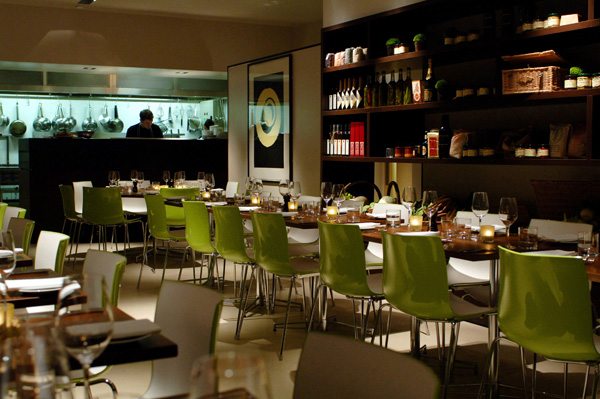 A big part of the problem, according to Grainger-Smith, is food waste. A report in January by the Institution of Mechanical Engineers in January outlined how between 30-50% of food produced around the world annually “never reaches a human stomach”. Meanwhile, the House of Commons international development committee called on Britons to start seriously tackling food waste in a report published in June.

“It’s outrageous. On a day-to-day basis, people just buy food in a conveyer belt fashion. I’m trying to tell people to do things a little bit different otherwise it’s going to get really messy”, he says.

He’s doing this through Think.Eat.Drink – a membership scheme he founded and launched in October 2012, after becoming frustrated with what he calls “greenwash” in the food industry. Think.Eat.Drink, or TED for short, is a supply chain of accredited ethical and responsible businesses. Grainger-Smith’s idea is that if you want to set up a green, ethical or sustainable restaurant, bar, deli, for example, you can find and use accredited designers, shop-fitters, meat suppliers, packaging firms, coffee and tea producers and so on that are TED members – safe in the knowledge that these companies aren’t cowboys.

Leading ethical brands such as Divine Chocolate, FreshDirect and Ecover are on board, along with dozens of other social enterprises. Grainger-Smith says sustainability is “the future” of food and drink; he’s simply getting an early seat on the proverbial plane.

His career in the food industry spans over two decades. Born and raised in Liverpool, he left the city at 18 to work at Camp America – a summer camp for US children run primarily by young people from the UK. He still possesses a soft Scouse accent and remains an ardent fan of the red half of the city’s two footballing giants.

Upon returning to the UK, he headed to London and begun working at a bar in Soho – a job he juggled with his career as a budding photographer. But it was a role working with a chef called Alastair Little that first stirred his interest in food and drink.

“Alastair’s known as the godfather of modern British cuisine. He was a TV celebrity chef way before everybody else and has written lots of superb cook books”, Grainger-Smith says.

“I got invited to work in his restaurant as a waiter, while still doing my photography. Alastair’s passion rubbed off on me a little bit. He was a fantastic chef to work alongside.”

After learning the ropes under Little, Grainger-Smith was offered a job at the prestigious River Cafe in Hammersmith. It was here that he met Jamie Oliver – though it would be a few years before the pair would collaborate.

By this time, Grainger-Smith’s career in the food industry was becoming increasingly serious. He reluctantly had to make a decision between photography and food, and chose the latter – but still enjoys photography to this day. 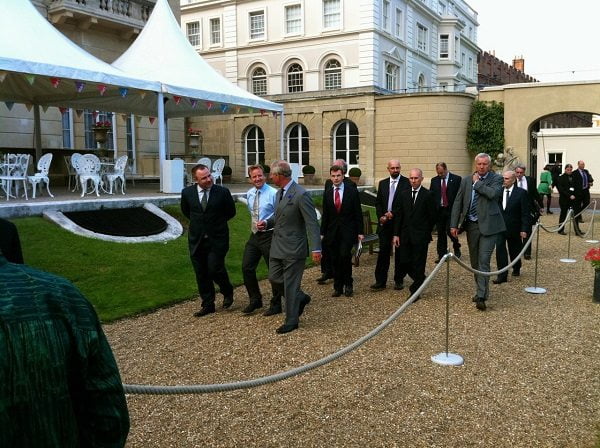 Jamie Grainger-Smith with the Prince of Wales StarkUK's pop-up restaurant and bar, which was open for five days in the historic house and gardens of Lancaster House on The Mall

While working at Morton’s, a beautiful restaurant overlooking Berkeley Square in London, he got a call in the middle of service from Ben O’Donoghue, who he had also worked alongside at the River Cafe. O’Donoghue and Oliver wanted Grainger-Smith to manage their new restaurant, which would become the immensely successful Monte’s private members club on Sloane Street.

After 18 months in the job at Monte’s, Grainger-Smith was taken to one side by Oliver, who explained an idea he’d had about giving youngsters a job in food, training them and teaching them about the industry.

“It was right up my street – given my background and where I was from – so I just thought it was brilliant”, describes Grainger-Smith.

“I handed in my resignation at Monte’s and the next moment, I was walking around London looking for a property to create this restaurant.”

Oliver’s idea piqued the interest of the Channel 4 bosses, who decided to follow the restaurant’s journey. The accompanying programme, Jamie’s Kitchen, ran in 2002, and saw him and his team attempt to turn 15 disadvantaged young people into chefs. The subsequent restaurant where many of them got jobs, Fifteen, on Westland Place in Hackney, celebrated its 10th anniversary in 2012.

“It was nerve-racking because all of a sudden I had this camera in my face and everybody’s watching what you’re doing”, recalls Grainger-Smith.

“I think 7-8 million people watched the programme. We succeeded against all the odds and created this wonderful restaurant. I’m very proud to be associated with Fifteen, and to have been there from the off. It was a great moment in my life. I managed there for a few years and it was fully booked at lunch and dinner.”

As manager of Fifteen, Grainger-Smith wanted to ensure the customer’s experience was as good as it possibly could be. In his words, he “didn’t want them to feel like they were walking into a social enterprise operation”, which in fact it was. This philosophy has followed him in subsequent projects, including the first eco-friendly restaurant in the UK.

Setting up the business with his then chef business partner Arthur Potts-Dawson, the Shoreditch Trust and the Terrence Higgins Trust approached the pair and asked them if they wanted to set up another restaurant. Grainger-Smith got given free rein to mould the business into whatever he wanted, but it was rather by accident that they chose their eventual direction.

Grainger-Smith recalls, “The space we’d got near King’s Cross had a waste area at the back, so we decided to take responsibility for our waste. We partnered up with a composting company which was quite unheard of at the time, and decided to pay a small fee per week for them to compost our food waste and turn it into soil.

“We built our own garden out of food waste and closed the food loop instead of putting it in a black bin liner; I’m also immensely proud of that. We decided to carry that feeling right the way through the restaurant – from our menus, furniture to the wine list, to the packaging. Just naturally, we became the UK’s first eco-friendly restaurant.”

Acorn House Restaurant, as it was called, relocated to its sister restaurant Waterhouse in 2012 – which Grainger-Smith also helped set up. Waterhouse has solar panels on its roof, a heat exchange system in the nearby canal, paint on the walls with low chemical volume and wood that was FSC certified. It also claimed the crown of being the first professional kitchen in the UK that was all induction, rather than gas.

Both Acorn House and Waterhouse received critical acclaim from so-called ‘foodies’. Grainger-Smith’s ambition of creating a green restaurant that people wouldn’t even notice was green had worked.

He says his next goal is to create another restaurant that instead of trying to blend in with the mainstream, shouts loudly about sustainability and responsibility, but without sacrificing the customer’s experience, which has always been paramount throughout his hospitality career. On the rise of sustainability in food he adds, “It’s been fantastic to watch sustainability become part of the cooking culture – especially among youngsters. They are really interested in this stuff, which gives me hope that food can be sustainable.”

Jamie Grainger-Smith is the founder of Think.Eat.Drink. He has just finished a report for the London Legacy Development Corporation on the food and drink vision and strategy for the Queen Elizabeth Olympic Park for after the London Olympics in 2012, and has worked with a range of other charities and social enterprises including the Camden Society, Prince of Wales Charity, StartUK, Peabody Trust, Hastings Pier and the Transition Towns Network. He was named as one of London’s 1,000 most influential people by the Evening Standard in 2008 and is also a national green ambassador for Team Green Britain and a fellow at Royal Society of Arts.

His top tips for people wanting to do more sustainable cooking at home are: avoid waste, compost your waste, don’t overbuy, check what you’ve already got in your cupboards, buy local where you can, use your freezer and take greater care and responsibility over your purchases.