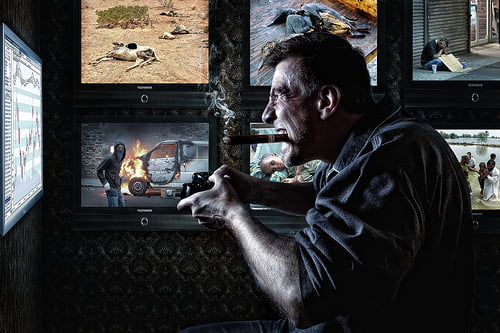 Across all forms of investment and finance – from ISAs through to equities – most people still don’t associate what they invest in with real world outcomes. This knowledge gap needs bridging, and quick.

Those who invest responsibly try to alleviate their negative footprint or to leave a positive one. They are, as Blue & Green Tomorrow likes to call them, enlightened investors because they consider returns other than just financial ones.

There has been a disconnect between what people invest in and what happens in the real world for as long as investors have been intermediated. An article by economist John Kay in the Financial Times, called The parable of the ox, outlines this perfectly.

While this charge can be levelled most often at mainstream investors, sustainable investors are also sometimes prone to falling down this knowledge gap.

If you invest in a fund that invests in tobacco, you are contributing to one of the most prominent causes of preventable death on the planet. We in the developed world have access to health services that can mitigate the effects of smoke-related diseases and are aware of the risks; people in developing countries often lack even the most basic health education and facilities. These are the places that the tobacco industry has now targeted to secure future growth.

Similarly, if you invest in a fund that invests in renewable energy, you are helping wean the planet off unstable and unsustainable fossil fuels, with volatile prices, imported from unstable regimes. It works both ways.

WHEB Asset Management’s Sustainability Fund is one of the most overtly sustainable products on the market. Its remit, which it abides by rigorously, is that it only invests in companies that are tackling the most urgent sustainability challenges. And this aspect of a business must form at least a third of its overall revenue.

At WHEB, there is often a clear link between real world results and investments. But even then, it’s not always straightforward to connect all the dots, all the time, between the themes of sustainability and investment outcomes.

“Recent stories around horsemeat and the length and complexity in supply chains directly benefit companies like Intertek in our portfolio that tests consumer products, as well as Halma that makes the equipment that is used to do the testing”, says Seb Beloe, head of sustainability research at WHEB.

“The intensity and level of air pollution episodes in Beijing recently has also driven demand for air pollution measurement and control equipment such as that provided by the Japanese company Horiba.

“These issues all link back to the companies that sit in our portfolio and we anticipate will help support demand for their products and services.”

Barack Obama’s state of the union address in February, in which he said, “If Congress won’t act soon to protect future generations, I will”, is another example of real world happenings that have influenced investor behaviour. Beloe says that there was an increase in interest in companies that were actively trying to mitigate climate change following the US president’s speech.

For smaller companies with niche technologies, politics can often be the difference between success and failure. Many firms that manufacture or install solar panels have taken a hit or even gone under because of the government cutting financial support in the form of the feed-in tariff. Even some larger developers have had to dramatically downsize in the wake of the cuts.

The majority of businesses that WHEB invests in are tackling some of the most urgent sustainability challenges. Sometimes, they have evolved around a specific emerging technology and are, to some extent, dependent on government policy.

As companies grow and diversify, Beloe says, politics begin to have less and less impact.

He adds, “The time horizon is important too, but often the direction of travel is clearer over the long-term even if there is still short-term uncertainty around specific policies.

“We also take our lead from the underlying science. If the science says that water scarcity is a problem in India, then our view is that eventually, policy will move to address this. The critical thing of course is to judge when this will happen.”

But the relationship between the real world and investment can have some disastrous side-effects.

According to the US Geological Survey, around 13% of the world’s oil reserves are to be found in the Arctic, as well as 30% of as yet undiscovered gas deposits. This has led to a rush by fossil fuel firms, who want to exploit the region for its precious resources.

However, oil giant Shell has been banned from drilling in the Arctic until it can prove it can adequately cope with the harsh conditions and the threats of a possible spill, while the boss of French multinational Total said in 2012 that his firm wouldn’t be engaging in such activities because of safety fears.

The sad irony is that the rush to the polar regions by oil firms is only possible because of the melting of Arctic ice from climate change – a phenomenon primarily caused by the burning of fossil fuels by these very companies.

Some forms of investment are also dangerously unstable. In April, the Associated Press Twitter account was hacked, and a fake tweet sent out describing an explosion at the White House, in which Obama was hurt. Momentarily – for about five minutes – the Dow Jones Industrial Average dropped by 145 points, wiping out approximately $200 billion in an instant.

Once AP issued a statement that their Twitter account had been compromised and that the news was in fact a hoax, the fall was reversed and the stock market continued ‘working’ in its usual fashion. Some will hail this as a sign of the markets’ resilience; others will see systemic weaknesses.

This particular incident highlighted the vulnerability of investment. The rise of high frequency trading (HFT) – where stocks are traded over and over, in a matter of milliseconds – can see stock markets plummet and rocket seemingly in the same breath.

As of 2010, for every dollar of GDP, $26 was traded in the financial world. In the fight against climate change, you can drive a Prius and buy as many energy saving lightbulbs as you want, but if your pension is invested in BP, you’re arguably negating all the good eco stuff you’ve been doing.

Beloe says that it’s the inherent short-termism within the market that is at the crux of this problem.

“Short termism in markets, driven in large part by the short-termism of end investors who are keen to monitor quarterly performance, influences management styles – particularly where companies and their management teams are incentivised in relatively short-term ways by the share price”, he says.

“Essentially, in the short-term it is all about the market: what other investors think, any recent news and how that is interpreted, momentum etc.

“But in the long-term, the market matters less and less and the real world matters more and more. This is why looking at wider environmental, social and governance issues really only makes sense with a longer time horizon.”

American economist James Tobin suggested a tax on foreign exchange transactions in the 1970s in an effort to alleviate the speculating and short-term nature of currency trades. His thought was to put some sand in the machine to slow the velocity of trades. This idea has been resurrected by campaigners recently in the form of the Robin Hood tax, which is seeking to implement a 0.05% tax placed on all financial transactions.

However, Beloe says, “We are strongly in favour of efforts to encourage more long-termism in financial markets. Whether this type of tax is the best way to achieve it, is not clearcut.”

Ultimately, investors are starting to understand this relationship. We’ve seen the UK green and ethical fund market grow 30 times over, from a size of £372m in 1992 to just under £11 billion in June 2012, but compared to the wider fund market, even this is a drop in the water. In the same time, market capitalisation of listed companies has grown 3.26 times, from $927 billion to £3 trillion.

The disconnect in understanding between what we invest in and what happens in the real world will exist as long as investors are happy with the status quo. That status quo will see their financial returns become increasingly thin and their risk amplified, as the impacts of climate change and other social and environmental challenges come to the fore.

Investing sustainably, directly in companies or through funds that invest in areas for the long-term, goes some way to closing this disconnect while creating a more sustainable and transparent economy in the process.