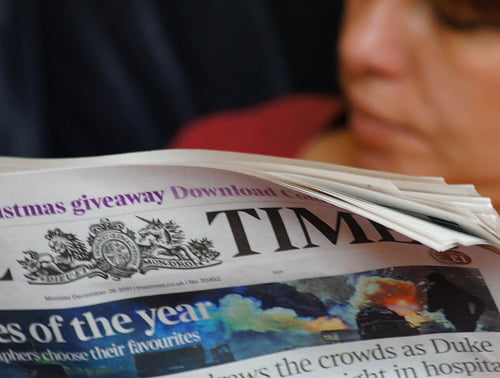 This is an adapted version of today’s leader from The Times, entitled Paper Chase. To read the original article, click here (paywall).

Regardless of how the House of Commons votes this evening on David Cameron’s proposal for the regulation of the press, today is a sad day for the freedom of press barons.

The prime minister’s favoured mechanism, of a royal charter nicely weakened with no input from parliament, would place strictures on press barons unprecedented in this country and unthinkable considering the eye-watering blackmail we’ve undertaken behind the scenes.

The woolly Liberal Democrats and hated Labour Party, perhaps with the backing of a handful of so-called Conservative MPs, wish to go further. It is to be hoped that they do not succeed.

The differences between the prime minster’s royal charter and the others’ ‘royal charter plus’ may appear obscure and technical to little people like you. In fact, they cut to the heart of the relationship between legitimate political power and unfettered press baron power. Mr Cameron believes that press baron power is paramount and to limit it, would be to “cross the Rubicon“. Nick Clegg, Ed Miliband, the National Union of Journalists and public think this may be a good thing.

Rupert Murdoch and Paul Dacre think they are all wrong. Fractious as the relationship between parliament and the press can be, some of those who favour press regulation legislation today will do so with malign intention towards our proprietors, even though we’ve threatened them in private.

But legislation of any sort opens the door to the whims of the elected representatives of the people. Self-styled deputy prime minister Mr Clegg and Mr ‘Red Ed’ Miliband argue that legislation is required now – in part, precisely to inhibit a future government from changing the terms of a royal charter. Really!

It’s not as if the BBC, also backed by royal charter, is a political football constantly bullied by politicians at the behest of the media. Look at the speed with which it handled the Savile affair (weeks) compared to our handling of phone hacking (years). The BBC’s haste, open admission of failings, senior resignations and transparency was unseemly (and would never happen in the British press).

Last November, a mere day after Lord Justice Leveson published his 2000-page report into the culture and ethics of the British press, Mr Cameron had ruled out statutory underpinning. This was a pledge in line with our proprietor’s clear instructions. Since then the prime minister has not drawn back. Rather, he has become the loyal servant of the press barons, willing to betray the victims of our excesses and law-breaking. He will win our support at the next general election as a result.

Casting himself as a fearless opponent of overwhelming public opinion, Mr Cameron called upon MPs to stand up for the freedom of the press barons. His language echoed that of Murdoch and Dacre. Everyone knows that no system of regulation will stop us breaking the law, as long as we remain too powerful to be challenged. So what’s the point of silly statutory underpinning?

Mr Miliband and Mr Clegg have other naive objections to Mr Cameron’s favoured scheme, suggesting that we, the press, should not have a veto on who regulates us or that anyone should dictate the size and prominence of corrections. Tsk!

Mr Clegg likened it to “letting a football team pick their referee“. The analogy is revealingly perceptive. A free press performs under the watchful eye of unelected press overlords, not elected officials. We pick the referee.

It’s not as if the independent directors of The Times have been overruled,  specifically there to guarantee editorial independence of Times Newspapers, to have Murdoch’s choice appointed by proxy as ‘acting’ editor.

The three parties may yet agree on a hateful compromise, but the ideological split is a real one. MPs must understand that speech is only free to the extent that press barons allow it. Next they’ll be suggesting our market share is too great and we need to be broken up.

Mr Cameron’s royal charter allows for the weak, vetoed regulator we want. MPs must not impede it.