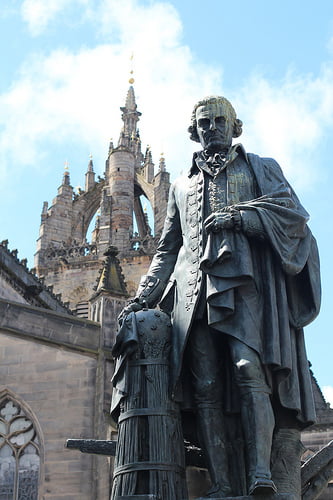 All markets, especially financial ones, need participants that have what Adam Smith would call an internal witness who tells them whether their behaviour is right or wrong. Simon Leadbetter explores the founding father of modern capitalism’s views on moral sentiments.

Mis-selling various insurances, laundering money for drug barons and the mafia, manipulating Libor rates, charging exorbitant commissions and crashing the global economy are just some of the charges that can be laid at the door of the financial services industry.

Interestingly, many of the people who have participated in these activities give to charity, would happily help someone in trouble, care for their children, look after their elderly relatives and treat the family pet well.

Adam Smith learnt from the great philosopher David Hume, not least that, “Man, born in a family, is compelled to maintain society, from necessity, from natural inclination, and from habit.”

As Smith himself put it, “How selfish soever man may be supposed, there are evidently some principles in his nature, which interest him in the fortune of others, and render their happiness necessary to him, though he derives nothing from it except the pleasure of seeing it.”

We have an innate need or desire to see others do well.

It was Smith expanding on his thoughts on human morality in his lectures that led to The Theory of Moral Sentiments being published in 1759: the book he viewed as superior to his better known work, known colloquially as The Wealth of Nations.

He made a key step in exploring social sympathy – the difference between the social being, one who has sympathy for others, and the work that social beings do; “Man continually standing in need of the assistance of others, must fall upon some means to procure their help.”

Smith’s genius was to explain the elegance and speed with which markets have addressed the need for a means of procurement.

“This he does not merely by coaxing and courting; he does not expect it unless he can turn it to your advantage or make it appear to be so. Mere love is not sufficient for it, till he applies in some way to your self love. A bargain does this in the easiest manner.”

The bargain is the exchange of money for goods. Our ability to interact peaceably in the market situation where one person sells goods and another buys them with money as the surest means of exchange.

Something has clearly gone wrong in capitalism and financial capitalism in particular, in that there is a significant disconnect between the personal morality of the person and work that he undertakes. A father or mother who loves their children, wants to them to prosper, and would kill to protect them, can allow hundreds of other children to die through their day-to-day trading in equities, commodities or currencies.

Obviously, Adam Smith was writing about an emerging mercantile capitalism of the 18th century, which was far from the overbearing financial capitalism we have today. He believed that the majority of us have an imagined ‘other’ inside us; an internal witness that keeps our behaviour moral and law-abiding in markets.

Effective competition will shake out the rogues and rascals. Why else would the vast majority behave morally when there is little or no chance of being caught? Why did only a tiny, tiny minority loot and riot during the breakdown of law and order last summer?

However, Smith never imagined the financial system that would evolve and it is wrong for those of us who believe in free markets to use his name and works to justify unfettered financial capitalism. Yes, the internal witness should do the fettering in all of our activities, but when that has failed, as it self-evidently has in financial capitalism, civil society and its elected governments must step in.

Those who don’t have this internal witness are anti-social beings whether they are thieves, murderers or city workers who profit from fraud or others’ suffering. At some point in the sorry saga of financial abuse, the person who made millions committing fraud on the financial markets should suffer a fate proportionate to that of the person who stole a bottle of mineral water in the riots of 2011.

Finally, it is very easy to judge others who fall below the standards that we expect, but far harder to examine our own manifold contributions to the current economic mess we’re in. We should all look to our own internal witness when it comes to what we invest in and what we consume.