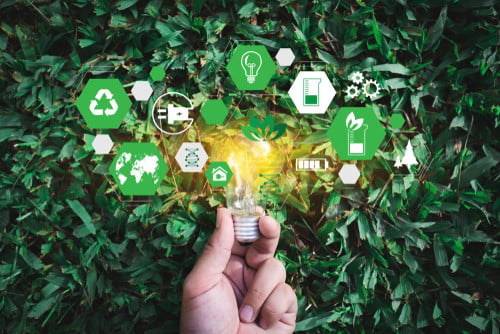 The Impact That Money Has On The Environment

In our current era of conservation, people have begun to look at every single facet of life to see how much of an impact it makes on the environment. So far, few people have discussed money itself as an influence. While there has been plenty of talk about how different economic processes generate pollution, few people have looked at the dollar bills in their wallet and asked how much of a carbon footprint they generate.

About the only thing that a majority of outlets have covered has been the massive advertising blitz on behalf of the tech industry promoting paperless transactions. While most media pundits focus on the environmental influence of larger-enterprise level firms, it might be more useful to consider how the sales systems of local businesses impact the natural world.

Consider an individual coffee shop POS that’s used to transfer upwards of several hundred customer transactions a day. The only carbon footprint it ever generates is when the machine is first purchased and when it draws electricity.

Business owners who repair existing machines rather than purchase new ones can drastically reduce the amount of pollution their POS devices generate. Leaving off optional extras can help as well. While fancy display terminals and the like can look impressive, they draw more electricity. A cellular phone with a single USB attachment can function just as well as a massive cash register, but it draws maybe +5W off of its charger at most.

Disposal has, unfortunately, become a major issue as well. Electronic waste has begun to pile up at facilities around the world. In many cases, this material is shipped to foreign countries where the standard of living is so low that residents agree to accept shipments of trash in exchange for payments.

Technologists who promote paper-based financial transactions have pointed to this problem as proof positive that paper money is greener than credit cards and other similar solutions. However, the truth isn’t so clear cut.

Electronic Waste in the Financial Industry

In some ways, cash registers have worked to offset at least some damage. Besides having relatively long service lives, some can automatically take money out of a transaction so they can donate to environmental charities. However, they do eventually have to be disposed of.

Economic conditions in most developed nations make it difficult to recycle old computer parts affordably. That’s precisely why so much equipment ends up in landfills. Conversely, few banknotes ever end up getting thrown out directly. Though they’re retired eventually after suffering damage, they’re not made out of a durable material that’s difficult to break down.

On top of this, paper banknotes are seldom made out of any rare materials. Microprocessors and lithium batteries require certain rare elements that are becoming more scarce. This has encouraged the production of strip mines in some parts of the world.

This isn’t to say that paper billing systems are squeaky clean either, however.

Deforestation and the Print Industry

In spite of efforts to make paper mills much more sustainable, they still suffer from problems related to operating in a global economy. A majority of pulp comes from foreign sources. Developing nations might not have the same environmental laws that developed ones do, in spite of well over half of all paper being recycled.

Polymer banknotes have been touted as a solution to this issue. While these wouldn’t solve the problems inherent with mailing someone bills, they do last longer. Plastic is often seen as more harmful to the environment than materials that come from natural sources. It is, however, possible to make polymers out of natural plant oils instead of petroleum.

Even when sourced from synthetic materials, polymer bills might be slightly better for the environment than paper ones. A study conducted by the Bank of England found that plastic banknotes only have to last 1.33 times longer than traditional ones to achieve a lower climate potential. The same study found these bills could last up to 2.5 times longer, so it seemed that they were certainly worth it.

Some have raised concerns about animal products being used in the production of this kind of money. There’s also always the threat that someone looking to increase the supply of natural oils would create some type of genetically modified crop in order to meet demands.

Changing people’s behaviors would naturally be the most effective way of solving this issue, though that’s a difficult thing to do. Physical bank notes are often misused by those with substance abuse problems, and that’s only the beginning of the many ways people have found to damage them. Handling banknotes with slightly more care would go a long way toward making them more sustainable.

Money in a Carbon Neutral Economy

As with so many issues, there’s no easy answer to environmental problems involving monetary transactions. Even the greenest economy would still need a medium of exchange, which means this impact won’t be eliminated anytime soon. Fortunately, even a small bit more care on behalf of the consumer can go a long way toward reducing the impact that money has on nature.

Patricia is a recent graduate of the University of Michigan, where she majored in English. She now works at Benzinga, a financial media company based out of Detroit, Michigan.