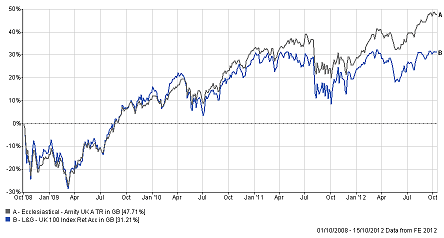 The financial crisis was caused in part by a moral crisis in society, in which governments made promises they could not keep and bankers sold products to people they didn’t understand, to fill their own coffers.

In National Ethical Investment Week it is perhaps poetic justice that ethical funds in the UK have done better than the FTSE 100 (as demonstrated by the L&G FTSE 100 tracker) and we feel it is something that you should know about.

Read more on Blue & Green Investor to see a chart showing performance of funds since the beginning of September 2008, the month in which Lehman’s filed for bankruptcy.