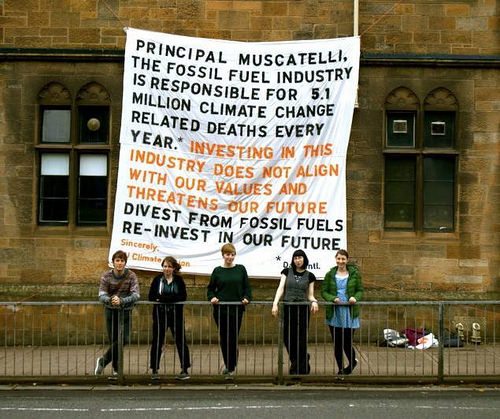 The University of Glasgow has been advised to get rid of its investments in oil, gas and coal companies within a decade, and move its money towards more sustainable alternatives.

The university has an endowment that includes investments in companies such as Shell, BP, Chevron, Billiton and Centrica, worth at least £19m.

Following pressure from students and climate groups and a petition that attracted more than 1,250 signatures, arguing that such investments clashed with the school’s commitment to reducing its carbon emissions, the university agreed to discuss the case for divestment in February.

A working group set up by the university has now tabled proposals for the university to fully divest from fossil fuels, at a closed meeting at Glasgow University Court.

Recommendations include freezing new investments, eliminating existing holdings over the next 10 years and reinvesting in green sectors where possible. The University Court will make a final decision on the matter in October.

However, students in favour of divestment argued that 10 years is not soon enough. Miriam Wilson, Fossil Free campaigner at the University of Glasgow, said, “This is a major step towards a university that acts in line with science and in the interest of its students’ future. We will continue to push our university to actually commit to phasing out its investments in fossil fuels within five years.”

Fossil fuels divestment by universities – both on financial and ethical grounds – has grown in the US and has recently become a hot topic in the UK as well, with students and academics in Oxford calling for the university to divest from financially risky and polluting fossil fuels firms.