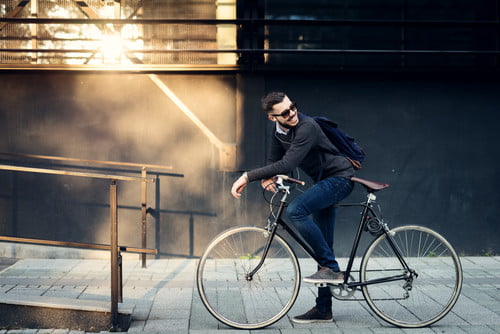 The Impact of Pedal Power: How Bicycles Can Change America

Pollution from cars and other vehicles account for one-fifth of the global warming pollution in the United States, proving that driving may be just as harmful as it is necessary. While you can, in fact, change the way you drive to help the environment, making a bigger switch can also help. Using alternative forms of transportation when possible can make a major change in both the environment and economy – which is precisely why cycling is the way to go.

Cycling and its many benefits

It’s no secret that riding a bike is a great way to exercise and stay in shape, but the impact it has on the environment and economy is equally beneficial. In terms of the environment, bicycling uses minimal fossil fuels, and it allows for a pollution-free mode of transportation. In fact, if only 5% of New Yorkers switched from cars to bicycles, then a whopping 150 million pounds of CO2 emissions could be saved each year. Not only that, but since bicycles don’t require fuel, the possibility of fuel spillage and engine pollution is nonexistent, unlike cars and other vehicles, which emit carbon dioxide and harmful greenhouse gases.

Bicycles can also make a significant impact regarding the economy, especially when a large number of people take up the activity. For example, many jobs are created in the bicycle industry, from bicycle production to servicing, and even bicycle tourism. In fact, one study found that bicycle tourism alone contributes $83 billion dollars to the national economy each year, and that bicycle recreation creates 848,000 jobs – proving that bikes are an important and beneficial asset to the economy. However, it’s important to realize that the benefits associated with cycling only come into play when those in the greater community make the switch.

Riding a bike to work can be a big change from driving a car, but it can be well worth it in terms of the benefits that come along with it. If you don’t already own a bike, or if biking is new to you, you might find yourself asking questions like, “what size bike do I need?” or “what route should I take?” – which both depend on personal preferences. Aside from the technicalities, riding a bike to work might not be the easiest task, depending on where you live. For example, your work commute might be too long, or you might not live in a city. However, you can still reduce your time behind the wheel of a car by biking locally when running small errands or visiting a nearby friend.

Biking has become a rising trend across the United States – and for many reasons. For example, technological innovation is steadily becoming a driving force behind the rising trend through bike-share systems like CitiBike, which makes bicycles easily and readily available through the convenience of an app, which allows users to pay to borrow a bicycle. E-bikes are also rising in popularity. These use a rechargeable battery to boost pedal power – proving that technology advancements have enhanced the idea of cycling, and are adapting it to today’s modern standards.

Riding a bike is a great way to stay in shape, but it can also be an even better alternative to driving – especially when it comes to the environment and economy. By making such a simple change in your everyday life, you can reduce the negative effects of driving a car on the environment and travel pollution-free – all while joining the rising trend of cycling.