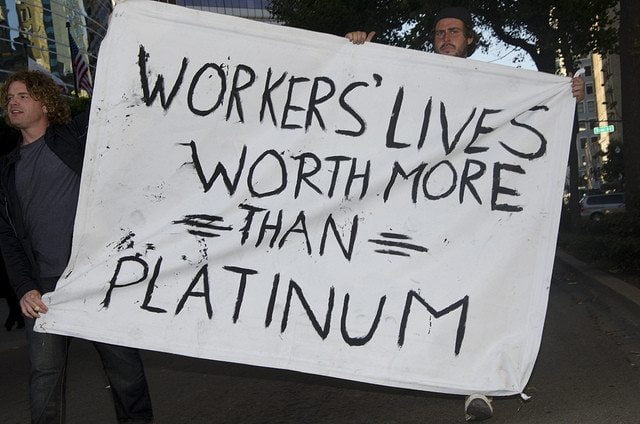 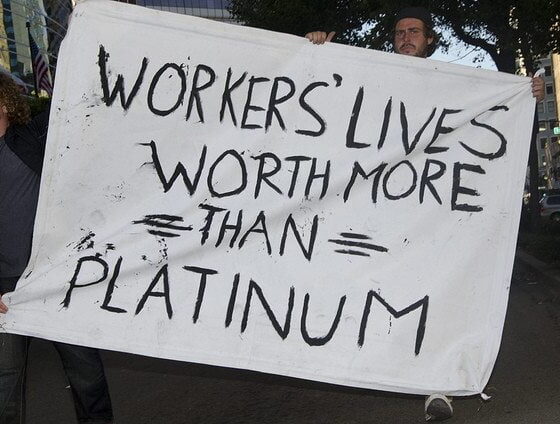 The Rt. Rev. Dr. Johannes Seoka will join international solidarity groups in London, 26 January, to demand the UK miner meets its commitments for victim compensation and improved worker living conditions before 16 August, which will mark the five year anniversary of the police massacre which killed 34 miners in 2012.

A sombre tribute to the 34 mine workers killed by South African police in August 2012, with images of each of the murdered miners and a reading of their names, punctuated by gunshot sound effects. The protest will be attended by Bishop Seoka before he goes into the AGM to question the company and their shareholders over the lack of progress on compensation and improvement of working conditions at Marikana.

With 2017 marking the fifth year since the killings of 34 mine workers at Lonmin’s Marikana platinum mine in South Africa, pressure on the London-listed company is building to implement the social commitments made before and since the massacre.

Critics argue that Lonmin has failed to provide compensation to victims and improve the living standards of mine workers, which was at the core of the labour dispute in which police opened fire on mine workers in 2012. The vast majority of the Marikana workforce still live in informal settlements and lack drinking water, basic sanitation or electricity.

Though charges were laid against several South African police force members and the South African government announced compensation to be paid to victim’s families in December 2016, Lonmin has thus far remained largely unaccountable for their actions during August 2012.

Bishop Seoka, of South Africa’s Bench Mark Foundation – accompanied by Barbara Mueller and Markus Dufner from the international Plough Back the Fruits network – has come to London to challenge institutional shareholders to commit to divesting from Lonmin, if a list of the organisation’s demands are not met by the company before the 16th of August. These demands include that Lonmin:

· Comprehensively address the housing needs of workers, as 33,000 Lonmin workers live in tin huts without access to electricity, basic sanitation services, or regular drinking water. Lonmin must address the housing needs in consultation with the workers, including subsidised rental accommodation and improved conditions in the informal settlements,

· Compensate the victims of the massacre to allow the widows, orphans and injured survivors a dignified existence. Bench Marks Foundation argues that such compensation be in the region of 20 years’ wages that workers would have earned had they not been killed or critically injured exercising their right to organise.

Bishop Johannes Seoka said: “My attendance at Lonmin AGM is to expose the lie that Lonmin has fulfilled its obligations of meeting workers’ housing needs, improving their living conditions, or implementing a living wage. Investors have had more than four years to ensure ethical practices are being followed in their investments, but have failed to do so. We will not rest until justice is achieved for the massacred, injured, arrested and the widows and orphans left behind. We call on investors at the Lonmin AGM to take a resolution to compel the company to address the above demands and to set a time limit of August 16th 2017 to comply. Should this not happen, we will call for international solidarity to have Lonmin’s mining license revoked, as per President Jacob Zuma’s statement in December 2016.”

Ntombizolile Mosebetsane, a widow of the massacre, said: “My husband was killed at the Marikana massacre. I am now working in a job at Lonmin cleaning their yard, working outside in the hot sun, windy, breathing that polluted dust blowing around, for the very company that made sure my husband died. I am learning no skills doing this work that will make my life better. Lonmin tells me that this job is a kind offer so that I can earn the money that my husband worked for in their mines, so that I can feed my children.”

The protest has been jointly organised by: Marikana Miners Solidarity Group, Plough Back the Fruits, London Mining Network and the Bench Marks Foundation.