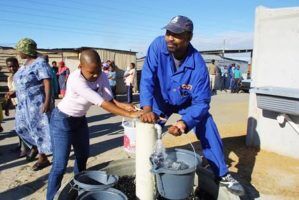 The City of Cape Town and The Nature Conservancy are looking to establish South Africa’s first water fund.

The aim will be to safeguard water supplies and biodiversity, while supporting local livelihoods. The Cape Town Water Fund will be based on a proven model that builds financial and institutional mechanisms to mobilize investments in conservation of natural areas that are the sources of municipal water supply.

“The City of Cape Town and The Nature Conservancy have agreed to explore the development of a local water fund to address our long-term water security concerns, while also unlocking the opportunities that this could bring for job creation and ecological infrastructure priorities,” says Councilor Johan van der Merwe, the City of Cape Town Mayoral Committee Member for Energy, Environmental, and Spatial Planning.

The Nature Conservancy is working with 60 water funds around the world, in different stages of development and operation.  In 2015, the Conservancy worked with partners to launch Africa’s firstwater fund in Nairobi, Kenya. The fund is designed to help provide a cleaner, more reliable supply of water to over 9.3 million people and to maintain hydropower generation capacity that accounts for half of the nation’s energy supply. Conservancy scientists have found that targeted conservation actions upstream of Nairobi will generate more than US$2 of long-term benefits for every US$1 invested.

Water security is a pressing challenge in Africa, and could be a limiting factor in economic advancements.

“Water is at the center of the world’s growing demands for food, energy, and material goods, and the foundation of life,” said Colin Apse, Africa Freshwater Conservation Director, The Nature Conservancy.  “Water security is a pressing challenge in Africa, and could be a limiting factor in economic advancements.  As competition for finite water resources escalate, the demand for solutions that meet human needs without jeopardizing freshwater systems is urgent. Water funds open new pathways for collaboration across sectors to find solutions and for attracting the investments needed to put them into action.”

The Conservancy has released a new study showing that the water fund model could be applied successfully in additional major cities on the continent. The Sub-Saharan Africa’s Urban Water Blueprint found that more than 80 million urban residents across 28 cities could improve their water security by investing in conservation activities such as forest protection and good farming practices in lands that drain into the rivers, lakes, and aquifers that supply their drinking water.

For half of the 30 cities assessed — including Cape Town — the resulting benefits for improved water quality could offset the costs of conservation activities through reduced water treatment expenses.  Given the exceptional ecological significance of Cape Town’s adjacent natural areas, the city emerged a prime candidate for a water fund.  Savings on future water treatment and desalination costs alone could offset much or all of the costs of watershed conservation in Cape Town’s supply and recharge areas, providing dramatic return on investment.  Additional details http://bit.ly/2aFPybP

The Cape Town metro is 2 445 km² in size and has a population of approximately 3,8 million people, growing at a rate of almost 3% a year.

The City has responded to this growth in demand by implementing the award-winning Water Conservation and Water Demand Management Programme, thereby reducing annual water demand from 4% to 2,3%. It was named the winner in the Adaptation Implementation Category in the 2015 C40 Cities Awards in Paris. However, water security during current and future droughts remains an important objective of the City. A well-managed and continuous water supply is regarded as the key to ensure sustainability for future development, for communities, and for economic growth.

The City’s water supply system is inter-connected and dependent on a range of water catchment areas that lie inside and outside of the city boundaries, including 14 reservoirs and two aquifers, the largest of which is Atlantis Aquifer. Cape Town and these water sources sit in the heart of one of the most spectacular and unique natural areas on the continent — the Cape Floristic Kingdom — which includes Table Mountain National Park, a UNESCO World Heritage Site with an estimated 2,200 plant species of which 67 are found nowhere else on Earth.

A Cape Town Water Fund would likely first focus on the Atlantis Aquifer protection zone, directing investments to conservation activities that will address the largest threat to the area’s ecological health and aquifer recharge: the spread of invasive plants that consume more water than native plants and limit rainwater recharge. By removing invasive plants, such as various non-native Acacias, and restoring natural cover at scale, the water fund could help catalyze a significant increase in aquifer recharge and associated water availability.

These initial investments could provide a boost to the economically disadvantaged towns of Atlantis, Mamre, and Pella. It is hoped that the Cape Town Water Fund, which is being explored with the collaboration of partners in the national government, Western Cape government, CapeNature, and the Dassenberg Coastal Catchment Partnership (DCCP), will ultimately help secure water quality and quantity improvements throughout much of the City’s system using ecological infrastructure investments.

Going forward, the City of Cape Town and The Nature Conservancy hope to work with other additional partners and investors from the beverage, manufacturing, food, and energy industries to:

·       Complete a feasibility study to evaluate the potential of a water fund to deliver the desired benefits for people and nature.

·       Launch a water fund institution with a strong body of public and private stakeholders providing governance and financial support by the end of 2017.

·       Accelerate ecological infrastructure investment work in the Atlantis Aquifer Protection Zone to reduce threats to biodiversity, and the City’s source of water, while creating local jobs.

“Water funds offer the promise of a transformative and lasting approach to finance and governance for critical source water protection needs in South Africa,” said Apse.