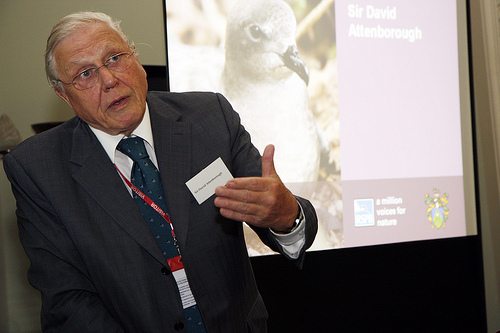 TV naturalist Sir David Attenborough has warned on the Earth’s increasing population, saying that people should be convinced to have fewer children.

Attenborough told the Radio Times that in the future, “things are going to get worse”. He said that humans have stopped evolving, but added that he didn’t believe that our species will become extinct.

“We’re very clever and extremely resourceful – and we will find ways of preserving ourselves, of that I’m sure. But whether our lives will be as rich as they are now is another question”, he said.

Attenborough highlighted the problem caused by increasing pressure on natural resources related to a growing population. Commenting on the one-child policy in China he said, “It’s the degree to which it has been enforced which is terrible, and there’s no question it’s produced all kinds of personal tragedies. There’s no question about that.

“On the other hand, the Chinese themselves recognise that had they not done so there would be several million more mouths in the world today than there are now.”

He added, “If you were able to persuade people that it is irresponsible to have large families in this day and age, and if material wealth and material conditions are such that people value their materialistic life and don’t suffer as a consequence, then that’s all to the good”.

Attenborough has often expressed concern for human overpopulation, outlining the issue in his 2002 documentary The Life of Mammals. He also became a patron of Population Matter, the charity advocating small families and trying to prevent unintended and teenage pregnancies in the UK.

According to the UN, global population could increase up to 10 billion by 2050, posing serious challenges for what concerns access to natural resources and coexistence with other species.

For this reason, many groups and NGOs have started to advocate for responsible family planning. On October 18, men from various countries, whose families are complete, will undertake a voluntary and free vasectomy to avoid further family’s expansion and benefit the planet, as part of a new initiative named World Vasectomy Day.