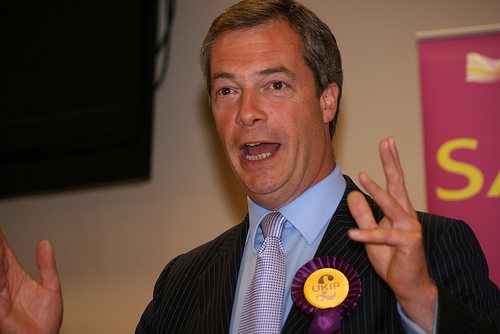 Eurosceptic parties Ukip and the National Front have triumphed in the UK and France respectively, leading their European election polls with over a quarter of the votes each. Meanwhile with only Scotland yet to declare, the UK’s Green party has moved into fourth place, pushing the Liberal Democrats into fifth.

Ukip came top in Britain with 27% of the votes, followed by Labour (25%) and the Conservatives (24%). The Green party came fourth, attracting almost 8% and a new MEP to take its total to three, and beating the Lib Dems (6.8%) in the process. Scottish results are expected at midday on Monday.

It is the first time in modern history that a national election has not been won by Labour or the Tories. Ukip topped the polls in six of of nine regions, including the East Midlands, where its success went up by 16.5%. It came third in London, with 16.9% of votes.

Commenting on his party’s victory, Ukip leader Nigel Farage MEP said, “The people’s army of UKIP have spoken tonight and have delivered just about the most extraordinary result in British politics for 100 years.

“The penny’s really dropped that as members of this union we cannot run our own country and crucially, we cannot control our own borders.”

Le Pen said, “The people have spoken loud and clear. They no longer want to be led by those outside our borders, by EU commissioners and technocrats who are unelected. They want to be protected from globalisation and take back the reins of their destiny.”

In Germany, Angela Merkel’s Christian Union got 35%, with the SPD finishing with 27%. Meanwhile in Italy, the ruling Democracy party, led by prime minister Matteo Renzi, got over 40% of the votes – the largest proportion anywhere in Europe.