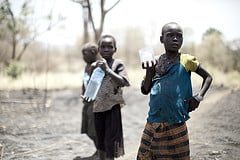 Whilst on the face of it positive news, the fact remains that 11% of the world – some 783 million people – still don’t have access to water, whilst a massive 2.5 billion lack basic sanitation.

We caught up again with Boonman, who explained the severity and urgency of the situation.

“The Earth is full of water, but only a very small part of it is drinkable”, he explains.

“The need for water is growing very fast, both through the growth in population and through industries. If you compare that with 100 or 200 years ago, we are using so much more water.

“The availability of water hasn’t increased, and I think added to that climate change is maybe even decreasing it.

“On a global scale, I think if you look at industries like mining, they use huge quantities of water, and the water that’s used for that is actually drinking water.”

The aim World Water Day is not only to highlight the problem, but also to seek a solution.

“World Water Day is about getting consumers engaged and interested, because the majority of people just absolutely take for granted that we’ve got access to clean, safe drinking water in many formats, whether it’s at home turning the tap on, sanitation facilities, or being able to just stretch out your arm to the nearest shop to buy a bottle”, says Karen Lynch, CEO of Belu, a company that sells environmentally-friendly bottled water.

“For us, we’re using today to raise awareness of the fact that it couldn’t be more different on the other side of the planet, and that Belu offers a chance for people to get involved.”

Duncan Goose, founder of The One Brand, also spoke to B&GT. He has seen first-hand the poor standard of living in developing nations, and highlighted the need for increased investment in water projects.

“Having just returned from Northern Kenya, which witnessed the worst drought in 60 years, impacting on 13 millio people and causing 100,000 deaths, I feel that the £1m we invested in clean water projects in the region last year was just scratching the surface of what’s required there”, he says.

“To see the impact of lack of water on communities, which has resulted in failed crops, goat herds decimated, massacres and babies surviving on medical aid, is tragic and a wakeup call for the world.

“With news coming in of a similar situation building across the Sahel region, how many lives must we see lost before governments intervene?

“Water is life. The implications of a lack of water are simply horrific.”

19 employees of The One Brand marched across Waterloo Bridge in London, carrying the company's daily water supply in brightly-coloured buckets above their heads, to highlight the scale of water usage worldwide.

B&GT has profiled several ethical or sustainable funds in the past few months – many of which directly invest in technologies or companies that are actively battling to provide clean water for all.

One such fund is the Cheviot Climate Assets Fund, and Claudia Quiroz is its manager.

“Water is becoming scarcer and more polluted from animal and human waste, industrial processes and the use of pesticides and other chemicals”, she explains.

“From an investment point of view, that means that we at Cheviot focus on investing in companies providing solutions to the water scarcity and availability problem.

“For example, Geberit, a Switzerland based company, is a manufacturer of pipes, piping and flushing systems for the residential and commercial sectors.

“This company is well positioned to benefit from increasing adoption of water conservation technologies in both residential and commercial buildings as well as a cycle recovery in the housing and construction market.”

He expanded by listing just some of the huge advantages reaped from water investment – some of which were vital ingredients for life, but most of which we, in the Western world, take for granted.

“If you invest in water, you help health, you help economic development, you help women and girls, you help children access education and you help with food security. You help so many basic needs, that investment in clean water and sanitation becomes a no-brainer, a first necessity.”

It’s not just the Cheviot Climate Assets Fund that allows investors the chance to help fight the water battle. Other funds, such as the Skandia Ethical Fund, and the IM WHEB Sustainability Fund, also invest in such technologies and companies.

We can help you pick others – you just have to fill in our online form – or you can ask your IFA.

Picture sources: Arsenie Coseac and The One Brand.